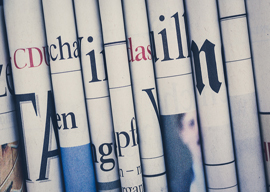 I hope and pray that October 17, 2016, will be remembered as the day press credibility in America died.

The Center for Public Integrity, a liberal nonprofit based in Washington, just released a report revealing that journalists have a favorite pooch in the current election fight: Hillary Clinton.

According to the report, “people identified in federal campaign finance filings as journalists, reporters, news editors or television news anchors” have donated nearly $400,000 this election cycle. How much of this went into Hillary’s deep, deep, Pacific Ocean-size deep pockets?

Yowza. The nation’s press corps truly is “with her.” And its members despise the Donald like an infected canker sore.

Proof is nice, but you don”t need a scientific study from a fancy D.C. think tank to prove that the media is diligently working to derail the Trump Train. Evidence is everywhere. Journalists openly wonder if Trump will encourage mobs to “beat and murder Jews and people of color with impunity.” They speculate that Russia is rigging the election in Trump’s favor while dismissing his rhetoric of a rigged campaign as charlatan talk.

“You have to be a blithering idiot to think the media isn”t in the bag for Hillary.”

Chris Cillizza of The Washington Post typified the media’s insincerity and lack of self-awareness by actually tweeting out, “Let me say for the billionth time: Reporters don”t root for a side. Period,” right before the CPI report came out. Cillizza’s response? “Well this is super depressing. NO idea why any journalist would donate $ to politicians.”

What’s depressing, Chris, is that you still have a job. And weren”t you the guy saying we should stop talking about Hillary’s health right before declaring that her health was a “real issue” after she suffered syncope during a 9/11 memorial event?

Do these people really take us for fools?

The answer, of course, is yes. You have to be a blithering idiot to think the media isn”t in the bag for Hillary.

Which is all unfortunate because the collapse of the American press into a Democrat Pravda doesn”t bode well for a country that’s already lost faith in most of its institutions.

Ragging on the corrupt media is all good fun, but the press is supposed to serve a legitimate role as a gatekeeper to truth. In any given society, there are norms, spoken and unspoken. Sociologist Philip Rieff called this a collection of “thou shalt nots.” Journalists are supposed to reflect these informal mores of the citizenry.

At least in our country, journalists aren”t supposed to have an agenda other than information conveyance for the common good. Unearthing the sins of public officials is a noble task. Spending an inordinate amount of time attempting to nudge some tottering old wench over the electoral finish line isn”t journalism”it’s activism.

Enough people have wised up to the game and have tuned out big media. The American public has an incredibly low opinion of the Fourth Estate. That goes double for Trump supporters, who now openly mock reporters at the billionaire’s boisterous rallies. At a recent rally in Colorado, Trump urged the crowd to “forget the press, read the internet, study other things.”

If journalists won”t cover Trump fairly, why should his supporters believe them?

The press” abdication of duty has unleashed a torrent of alternative news sources, churning out endless gobs of information and commentary online. Our political system has yet to fully acclimate to the new paradigm. “Disintermediating technologies bring fresh voices into the fray, but they also bring atomization and cacophony,” wrote Jonathan Rauch in The Atlantic earlier this summer. For every prolific blogger with something smart to add to the conversation (I”m looking at Takimag’s own Steve Sailer), there are dozens of cranks out there spouting half-truths on websites designed in the late “90s.