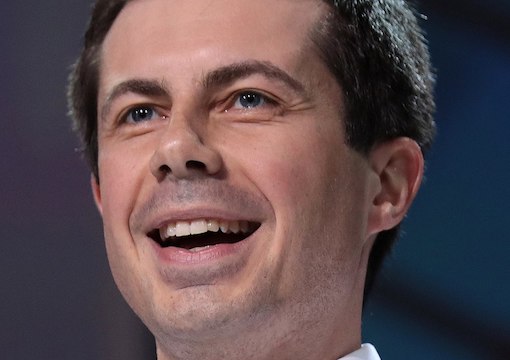 Pete Buttigieg’s success in Iowa has, according to The Washington Post, “unleashed emotion” among Democrat party members and reignited the question of “whether a gay person or a straight person had a better chance of beating [Donald] Trump in November 2020…. 69 percent said it didn’t matter, while 29 percent said a straight person would have a better chance.” Buttigieg is in truth probably the least worst option for Democrat voters given the alternatives. But let’s reignite a broader question. It is not the prospect of a homosexual U.S. president that betokens how liberalism has disappeared up itself; it is the insidious ease with which newspeak concepts like “straight person” have insinuated themselves into the language.

These so-called “straight persons” that one reads of in the media these days should have no need of any sexual-identity tag to pin on themselves as some subgroup in a relativist social universe. They are Mr. & Mrs. Ninety-Five Percent of all known sexual activity. They are boy meets girl; yin and yang. Virtually the entirety of civilization’s artistic expression of sexual love was—until these crass times—about these “straight persons.” Tristan and Isolde, Paris and Helen of Troy, Miss Bennet and Mr. Darcy, John-Boy Walton and Jenny—straight persons all. We do not need the “heterosexual” ID tag, either, come to that.

Being homosexual can doubtless be a difficult hand to have been dealt from life’s psychological deck of cards, but much less so now than in previous times. In Western societies (though not, of course, in certain others), historic hostility has withered away about as far as is realistically achievable given the limitations of human nature. But there’s a price to everything, and the price tag in this case has been the media promotion of a celebratory “Gay Pride” hubris that annoys the hell out of plenty of perfectly reasonable people. The 2017 piece “Heterosexuals Deserve Our Support” from New York Times columnist Lisa Pryor is a breathtaking example of “gay culture’s” more Orwellian tendencies:

[One] particular family arrangement does appear to have a slight advantage when it comes to raising children. Of course I am speaking about lesbian parenting, which multiple studies have shown confers certain advantages on children…[whereas] heterosexual pregnancies typically come about as a direct result of a particular sex act heterosexual adults engage in for the purpose of their own pleasure….

“Homosexuality is just one small part of one compartment on the streetcar named desire.”

There will be plenty of homosexuals—perhaps even a majority—who will also find this sort of posturing by gay politicos like her as distasteful as anyone else. Banner-waving activists are a particular breed, whatever “cause” it is that they’re posturing about. Homosexuality need not be scoffed at, but the shallow, narcissistic, mass-media-driven obsession with “gayness”—most gruesomely manifested in Gay Pride—this is fair game.

There are—so I read recently—200-plus Gay Pride events to look forward to in the coming year in great cities around the world. Enthusiastic flag waving will be the order of the day. Failing to enthuse is, if not quite illegal, certainly bad form. No public bodies or civic institutions will want to be caught out unwoke. City police forces will be tagging along with their own banners showing solidarity with the “LGBT community,” etc.

What exactly is this Gay Pride hoping to achieve anyway in metropolises where being able to call yourself gay is already a minor fashion statement? Why not quit while they are ahead, like a 500% overrepresentation in the creative and media industries and in the “opinion-forming” classes generally? Being a “gay couple” is absolutely your fast-track route to getting yourselves on any show on British TV. There are places in the hippest parts of London and New York where angst-filled teenagers bury their faces in their pillows crying, “Why couldn’t I have been gay, like all my friends are?” Okay, not that often.

It is right to hate bullies; all bullies—even the “gay rights” politico type. Not being clear about this is one of the great philosophical errors of our era. Set your moral compass 180 degrees from the bullying tendency in human nature and you can then jettison all the politically correct anti-this-and-that-ism that fills the heads of politico paranoiacs and overly biddable, groupthink types the whole world over.

“Gay” is another newspeak linguistic virus. Homosexuals are no more likely to fit the term than anyone else. They might well have a few extra issues to deal with—like their inability to procreate, for instance—and so be slightly less cheerily carefree than your average Joe. There might, though, be a silver lining to the cloud of their inner struggles; they might paint a Sistine Chapel ceiling or write À la Recherche du Temps Perdu. But this would not be nearly so likely if they were so full of self-congratulatory narcissism that they wasted their creative energies relentlessly waving Gay Pride banners even in situations where this is completely beside the point.

Fact of the matter is this: Homosexuality is just something that happens to some people for whatever reason but doesn’t happen to most. It is something that, to most people, always did—and ultimately always will—seem a bit queer. It is not to be sneered at but nor is it to be celebrated. It is just one small part of one compartment on the streetcar named desire. As for same-sex marriage; have it; don’t have it; whatever? The majority of what the chatterati refer to as “you the public out there” have other more important issues to obsess about instead. In a world where untold numbers of innocent people are terrorized and slaughtered, on a daily basis, in places unbound—and often unreported because (in mediaspeak) they have failed to “capture the public imagination”—could the column inches devoted to “LGBT issues” in the liberal media perhaps be scaled back to something more in proportion to the numbers of people who actually give a damn? Now, that would be progress. And with that thought, I am gone with the wind.