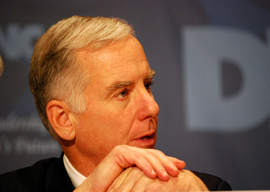 Often, when people who know me primarily through my writing meet me in person, what stands out to them the most is that I rarely cuss in person. It can be a little disconcerting, because in my writing, I cuss a lot. But one-on-one, I”ll usually substitute “friggin”” and “spit” for their coarser alternatives. Sometimes I cuss when I write because I purposely want to be dismissive and disrespectful toward a particular person (as in, this person isn”t worth the respect of a dignified response). For example, when some Nazi type emails me on Facebook calling me “one of the good Jews,” or asking why I “shill for the ADL” by refusing to deny the Holocaust, I always respond with a short, sharp “fuck off.” I like doing that because it inevitably elicits a reply that resembles the pathetic whimpering of a sad puppy: “You didn”t have to be rude…I was only trying to start a dialogue!”

So when I got into it on Twitter a few weeks ago with former Vermont governor and DNC chair Howard Dean, I could have stopped at just calling him a moron. But no, I had to say fucking moron, because I was purposely trying to be impolite and contemptuous (“Respect the office if not the man” stops applying once the man leaves the office). Anyway, it worked, because the guv retweeted me, and a small patch of holy hell broke out between his supporters and (in rather smaller numbers) mine.

So why would I call a screeching, incompetent former governor a “fucking moron”? Because he deserved it, that’s why (I mean, why else?). On April 20, the intellectually challenged ex-governor shared a one-sentence declaration of “fact” with the world, with the intention of giving aid to the protesters who were, at the time, trying to get Ann Coulter banned from speaking at UC Berkeley. “Mr. Microphone’s“ tweet read “Hate speech is not protected by the first amendment.” I”ll let it go that the final two words should have been capitalized. No need to be a grammar Nazi to a man who’s acting like an actual book-burning Nazi on Hitler’s birthday. Of course hate speech is protected speech. And the world didn”t need me to say it. Sometimes leftists say things that are so stupid, even other leftists feel compelled to chime in. Dean’s blatant falsehood was demolished by the left-leaning “fact checking” site Politifact, and competent scholars on all ends of the political spectrum joined in. Dean was called a “constitutional illiterate,” “uninformed,” and just plain wrong in dozens of op-eds from dozens of people more well-informed than the former governor (a classification that even most 10-year-olds fall into).

“This is how you bypass the need for anti-speech laws; just convince everyone that we already have them.”

But nobody had called him a “fucking moron.” Yet. Seeking to fill that void, I wrote:

Well, Governor Scream wasn”t about to let facts get in the way of a perfectly bad argument. He retweeted me, adding a pearl of wisdom that, I”m certain, he just knew would shut me down and end the debate:

Why don”t you read the 1942 Chaplinsky decision from Scotus.

At that point, the stupidity became too damn dense for me. Obviously, I had to up my berating:

Fucking moron. Chaplinsky was about “fighting words,” not offensive political views. Idiot. It scares me that you wanted to be president.

I didn”t wade through all the responses Dean’s retweet elicited (I”ve never been much of a Twitterer), but from what I saw, even some of Dean’s supporters had to admit that even though I may be a rude a-hole, I”m right. As one Dean follower acknowledged, “He (Cole) may be acting like a jerk about it, but he is correct on the facts.” Well, of course I am, as evidenced by an op-ed the following day by UCLA law professor Eugene Volokh (making his second consecutive appearance in this column), in which the constitutional-law scholar made the same point I did about Chaplinsky: “No, Gov. Dean, Chaplinsky v. New Hampshire does not recognize a “hate speech” exception.” Volokh pointed out, as did I, that Chaplinsky was a narrow ruling about “fighting words” (abusive remarks spoken directly to a person’s face in a manner likely to provoke a fight). Volokh concludes, “So I don”t think that Chaplinsky does anything to support Dean’s initial statement.”

I”ll tell you why I lost my cool with the governor. There is, in my opinion, a direct link between the stunning ignorance (and in some cases deceit) exhibited by leftists in academia and politics regarding hate speech and the First Amendment, and the climate of censorship and violent bullying we see on college campuses (and elsewhere) whenever someone with right-of-center views dares speak them aloud. The more that dolts like Dean continue to spread the abject falsehood that “hate speech” is not protected, the more emboldened the bullies and censors become. See, there’s an aspect of the lynch-mob mentality, a shared way in which many, perhaps most, lynchers view their actions, that often goes unnoticed or unexplored. Sure, in a lot of instances (for example, during the Klan’s heyday in the American South), lynchings were acts driven by nothing more than pure racism, with no attempts made to introduce comforting rationalizations. “A black man brushed against me in the general store today!” “What? No nigger touches a white woman! String him up!” But often, lynch mobs were driven by the belief that they were doing the work the law should be doing but wasn”t. If one reads accounts of 20th-century American lynchings, one finds that, as often as not, lynch-mob leaders viewed themselves as the guardians and enforcers of the law. Some “corrupt” authority had failed to respect and implement the law, so the mob was forced to step in to ensure that justice was done.

The corrupt authority/authorities were the ones violating the law; the mob was simply there to see that the law was enforced. This inversion of reality is the best way to assemble a really good lynch mob. The crowd must be convinced that they are correcting a wrong, not committing one.

Case in point”the 1915 lynching of Leo Frank in Georgia, which I wrote about a few weeks ago in a different context. Frank had been convicted by a jury and sentenced to die for the murder of 13-year-old Mary Phagan. When Gov. John Slaton, after voicing concerns about the integrity of Frank’s conviction, commuted Frank’s sentence from death to life imprisonment (not a pardon; Frank would have remained imprisoned for life), the good citizens of Georgia believed, in rather large numbers, that the governor had impeded justice by abusing his authority to abrogate the lawful decision of a jury. When Frank was strung up, the lynch mob saw itself as the agent, the executor, of the law.