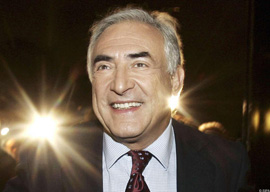 They say no money was paid and no prisoners were exchanged. I’m not talking about Dominique Strauss-Kahn, but about the two French hostages released in Afghanistan while Strauss-Kahn’s alleged rape victim’s credibility was disintegrating.

The Taliban had captured television correspondent Hervé Ghesquiere and cameraman Stéphane Taponier of television channel France 3 in December 2009. Since then, life-size photos of the two hostages have adorned almost every city hall in France. The public took the two fearless journalists to their hearts and demanded the government do something for them.

Although France officially denies it made a deal with the Taliban, it appears the government did something to get the men out. Hostage Ghesquiere said he doubted the kidnappers let him go in return “for chocolates.” The Taliban spokesman, who calls himself Zabiullah Mujahid, announced, “France was forced to accept the conditions put forward by the Islamic Emirate.” According to much of the French media, those conditions included the release of Taliban fighters in French custody. What we had here, Dolores, was an old-fashioned hostage exchange. (Do you think France let some American drug dealers out of La Santé in exchange for Strauss-Kahn?)

“Not since Nelson Mandela left Robben Island has a country so joyfully welcomed a politician coming out of custody.”

As lucky as the two French journalists were to obtain their liberty after eighteen miserable months, their timing could not have been worse. Normally, parades would have welcomed them to the land of the living. After all, we in France, even down here in Provence, know their faces from thousands of posters and have been yearning for their ordeal to end. They should have been front-page news. Yet they vanished. If you were searching for their story, you might find it between the crosswords and the classifieds.

Why? Page One became the domain of a man whom the French are now treating like a prisoner of conscience. Dominique Strauss-Kahn’s liberation trumped that of two journalists the country had been fretting over for a year and half. Our local paper, La Provence, pasted his picture in full color beside his wife with the headline, “L’incroyable coup de theatre.” Under the headline “DSK, le nouveau big bang,” the paper devoted a double-page spread to his victimization and probable comeback. Not since Nelson Mandela left Robben Island has a country so joyfully welcomed a politician coming out of custody.