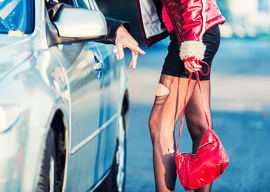 The cover of this week’s British Medical Journal is emblazoned with the words “Sex workers risk prosecution under UK law if they carry more than six condoms.” The words “six condoms” are emphasized by a change of color of lettering from blue to green. Then the cover asks, “Would decriminalisation be safer?”

The commonly employed argument that prostitution is the oldest profession and no law has ever eradicated it seems to me a bad one. Whether or not it is the oldest profession in any literal sense, it is certainly a very old one; but then murder (if the Bible is to be believed) was one of mankind’s earliest activities. We do not propose to legalize murder simply because no law has ever eradicated it.

On the other hand, I can see the practical advantages of freeing prostitution from the attentions of the law (within limits, of course). But this question was not what I found most interesting about the cover. It was the replacement of the word “prostitutes” by “sex workers”—a replacement that is virtually de rigueur in medical journals these days.

“Surely we can sympathize personally with people without having to pretend that what they do is admirable?”

A century and a half ago, Charles Dickens satirized the tendency of his countrymen to use euphemism from a false sense of delicacy. Mr. Podsnap was a character in Dickens’ last completed novel, Our Mutual Friend, a “man so eminently respectable” that “he was sensible of its being required of him to take Providence under his wing.” Mr. Podsnap had a daughter whom it was necessary for him to protect from the vulgarity and wickedness of the world:

A certain institution in Mr Podsnap’s mind which he called ‘the young person’ may be considered to have been embodied in Miss Podsnap, his daughter. It was an inconvenient and exacting institution, as requiring everything in the universe to be filed down and fitted to it. The question about everything was, would it bring a blush into the cheek of the young person? And the inconvenience of the young person was, that, according to Mr Podsnap, she seemed always liable to burst into blushes when there was no need at all. There appeared to be no line of demarcation between the young person’s excessive innocence, and another person’s guiltiest knowledge.

The world’s medical journals seem to me in turn to be guilty of fulminating Podsnappery, treating doctors as if they were blushful Miss Podsnaps, who might faint at the mere mention of prostitution or its cognate words.

Of course, the BMJ might be trying to reform our moral thinking, insinuating by its words the notion that prostitution is a job like any other—medicine, for example. No opprobrium should attach to it; and if you accept money to say, write, or do something that you believe to be wrong, you do not prostitute yourself, you merely sex-work yourself. As for pimps, they are sex coordinators, sex agents, or sex facilitators, who bring sex worker and client together as a literary agent brings author and publisher together.

I have twice been asked to appear on a panel at literary festivals on the subject of prostitution. Why I should have been selected for this honor, I do not know; but on both occasions I shared a panel with a chairwoman of a prostitutes’ collective and a female sociologist who claimed that prostitution was work like any other—better, in fact, since it entailed flexible hours, tax-free pay, a better hourly rate than average, and the like advantages. The sociologist was herself very prim and proper.

I pointed out that, having taken this “normalizing” view of the activity, the government of a German state had suggested that women who claimed unemployment benefits could rightly be put to sex work, as they were obliged to accept work if it were offered. The experiment did not last long, which suggested (to me, at least) that the work was not the same as, say, that of shelf stacker or secretary.