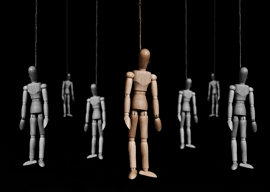 I thought it would be a bigger deal. Last week marked the 70th anniversary, to the day, of the hanging of the Nuremberg trial defendants, and I have to admit, I was expecting to read a lot more about it in the press. After all, with only two weeks to go before an election in which “literally Hitler” is the GOP candidate, I expected the media to use the Nuremberg 70th as an excuse to dredge up fond nostalgic memories of the “noble exercise in justice” (well, I”ll be damned…I typed that line with a straight face) that concluded with ten nasty Nazis dancing at the end of a rope (not counting the one who, in the words of every uninspired narrator to ever give voice to a World War II documentary, “cheated the hangman”).

But no, the anniversary celebrations were muted. Maybe everyone is just too busy covering the upcoming election. Perhaps there have been too many “Trials of the Century” over the past hundred years to bother making a fuss over the anniversary of Trial of the Century No. 7 (or is it 8?). Or it could be that Holocaust mavens are a bit wary these days in the wake of the revelation that the “landmark” commemorative Nuremberg documentary from ten years ago, Nuremberg: The 60th Anniversary Director’s Cut, turned out to have been produced by a then-closeted Holocaust revisionist (me).

Or it might just be that what used to be considered Nuremberg trial “revisionism” has seeped into mainstream history to enough of an extent that no one who actually understands what went on in the year preceding the executions has any great desire to jump for joy.

There are three uncomfortable truths that those “in the know” generally accept about the Nuremberg trial, even if the news has yet to trickle down to those who get their World War II information from the History channel. To begin with, Nuremberg was not a “Holocaust trial.” This is a simple fact that most historians fully understand. Nazi atrocities real, exaggerated, and imagined were indeed covered during the proceedings, but only in the service of securing convictions based on much broader charges. As UConn School of Law’s Richard Ashby Wilson pointed out in his 2012 book Writing History in International Criminal Trials, many of the top scholars in the field of Holocaust history “maintain that the International Military Tribunal did not adequately address the most important Nazi crime of all”the mass extermination of European Jews. The trials left an incomplete and impoverished historical record because crimes against humanity were subordinated to crimes against peace and conspiracy to wage an aggressive war.”

“It’s almost as if Streicher had cursed his captors, so that one day they would be killed over caricatures, just as he was.”

When I was raising money for Nuremberg: The 60th Anniversary Director’s Cut, I absolutely took advantage of the fact that the average dunderhead mistakenly thinks of Nuremberg as a “Holocaust trial.” Preying on the ignorance of the lightly informed, I was able to attract the attention of a pretty diverse crowd of “helpers” in my quest to raise money for the project, including Mark Cuban, Terry Semel, Whoopi Goldberg, Oliver Stone, and hotshot entertainment lawyer Matt Galsor, all of whom were already quite thoroughly convinced, long before I encountered them, of the fact that the Nuremberg trial was all about “proving” the Holocaust. I fed them no lies; I just somehow forgot to disabuse them of their misconceptions. Had I been David Cole instead of David Stein at that particular moment, I would have quoted the aforementioned Professor Wilson: “Many historians have concluded that the Nuremberg trials did not present an authoritative historical account of the Holocaust and the trials may even have distorted the record for future generations.”

And that brings us to uncomfortable Nuremberg trial truth No. 2: Its contribution to the historical record is really quite crappy. The Nuremberg “record” was assembled not by meticulous historians pursuing accuracy, but rather by vengeful governments and grandstanding prosecutors who saw the trial as nothing more than a convenient means to a political end (even if sometimes that end differed among the victorious Allies). Robert Wolfe, chief of the Modern Military Branch of the U.S. National Archives, summed up the situation well in an essay for the book The Liberation of the Nazi Concentration Camps:

For the discovery of the Holocaust, the Nuremberg Trials were both a boon and a bane. No mere historical research could have mustered the costly five year effort in staff and resources that were commanded by the proclaimed Allied policy of punishing war criminals. Documents were thus quickly uncovered that we might otherwise still be hunting 35 years later. But documents were also often irretrievably torn from their context, carelessly excerpted, poorly translated, duplicated under various unrelated designations, and incorrectly assembled in artificial folders in a manner that muddles their meaning and taints their authenticity.

The third generally accepted truth (among historians) that probably contributes to the queering of anniversary festivities is the understanding that all of the main actors at the trial were foul. The Soviets merely wanted a show trial, the British would have preferred summary executions of the captured German leadership, and the Americans? Well, the Americans did what Americans often do in wartime”torture, torture, torture! In one of the greatest ironies of the trial, the most corrupt and vile of the presiding governments”the Soviets”were the only ones with an actual case when it came to prosecuting Germany for waging “aggressive war.” Russia was indeed invaded in a treaty-violating surprise attack, and Hitler did indeed pursue a “war of extermination” on the Eastern Front. Conversely, the “civilized” British and French charged the Germans with starting a war that was declared by…the British and French. At Nuremberg, everyone was a bad guy. It was like a production of Return of the Jedi that was all Empire and no Ewok.

So sure, it makes sense that observations of “big number 70″ were somewhat muted.

That said, all last week I kept thinking about how pleased Julius Streicher would be, were he alive today. For the uninitiated, Streicher was the most absurd of the Nuremberg defendants. He was the publisher of Der StÃ¼rmer, a publication about which the term “anti-Jewish” seems like too much of an understatement. Streicher hated Jews, and he showed it by employing what passed for memes back in his day”ugly, over-the-top, hate-filled cartoons and caricatures, coupled with what can be considered the 1930s version of clickbait”fake news stories with sensational headlines (“Two Jews encounter an Aryan girl in a dark alley…you won”t believe what happens next!“). As a human being, Streicher was a boob, a laughable buffoon despised by pretty much every high-ranking Nazi except Hitler (a man known throughout the war for his, ahem, “exceptional” judgment).

Among the men in the Nuremberg dock, Streicher stood out for his low IQ. Whereas most of the defendants had high or even genius IQs (by the Allies” own assessment), Streicher was the only one with a low-average IQ. And what a simpleton he was. Before the war, when he transitioned from publisher to political functionary as the gauleiter of Franconia, his corruption and general imbecility led to his removal from power after a Nazi tribunal found him “unfit for human leadership.” He spent the war under a rather generous version of Nazi-ordained house arrest at his Nuremberg farm.

Streicher should not have been executed at Nuremberg. Indeed, it can be argued that, like Fritzsche (one of only three defendants to be acquitted), he didn”t deserve to be on trial alongside men who”d held real power during the war. Vile as Streicher was, he was a tabloid publisher. The fact that he did, for a time, wield political influence in Franconia does of course make him more than just a cartoonist. Norman Finkelstein’s moral equivalence between Streicher and the Charlie Hebdo publishers is moronic; Streicher did a lot more than just doodle. Yet still, it was his cartoons that got him executed, and that was a travesty of justice. As Dr. Michael Salter of Lancashire Law School noted in his scholarly paper “The Accidental Birth of Hate Crime in Transnational Criminal Law,” “Julius Streicher was the first journalist to be convicted of international crimes stemming from his media activities.” Streicher was indeed a journalist (a reprehensible journalist is still a journalist), and nobody should ever be executed for mere words or cartoons.