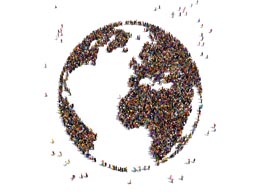 In the spirit of Aristotelian moderation, allow me to suggest that an emerging danger of the 21st century is that the non-Western world could get overly right-wing. Ironically, a major cause would be that white Western liberals are focusing all of their firepower”using as cat’s paws flagrantly illiberal nonwhites such as Muslim immigrants”upon the second-most progressive group on earth, white Western conservatives.

In a world where Western whites are an increasingly tiny minority, falling from roughly 19 percent of the world’s population in 1950 to perhaps 9 percent today, this divide is dangerous. The internecine status war among the people who built the modern world looks increasingly likely to embolden the rest of the human race to regress into bad old habits, such as religious dogmatism and bellicose tribalism.

As Tom Wolfe entitled his last novel, the world seems to be headed Back to Blood.

For example, ever since the Paris massacres, American liberals have been engaged in a collective nervous breakdown over their insistence that their War on Islamophobia is the most important value imaginable. The respectable opinion has become that whites cannot morally allow themselves to recognize that Middle Eastern Muslims tend to be the most violently reactionary people. Noticing would be, we are lectured, “un-American.”

But that raises the question: Why should Muslims in the West bother to behave better if rewarding the bad behavior of Muslims with visas has become the acid test of gentility among Western whites? What’s the incentive?

“The question of the century will be whether we Westerners can set aside our self-indulgent resentments of our fellow citizens to bond together in self-defense.”

For a long time, Westerners have provided the moral leadership of the world by emphasizing objective principles rather than humanity’s default nepotism and opportunism. But Western whites have now upped the ideological ante with one another over their new highest standard: Never, ever perceive the faults of nonwhites.

Thus the most liberal institutions in America, colleges, are presently self-destructing during the Black Autumn. They are paying the price for encouraging their lowest-IQ denizens, football players and other blacks admitted under affirmative-action standards, to act out in tantrums of racial animus against white liberal administrators.

But why would blacks self-discipline themselves when they are rewarded for infantile outbursts?

Therefore this has been the year of shrieking young black women: at a Bernie Sanders rally in Seattle, at Yale, and now at Princeton. (Here’s a striking video.) A small number of angry black coeds occupied the office of the college president and extorted an agreement to consider going all Taliban on Princeton’s various memorials to its onetime leader, Woodrow Wilson.

Of course, Wilson, whether for good or bad, was the epitome of the white progressive reformer. But in 2015, all that matters is tribe.

Likewise, the Democrats are increasingly abolishing the name of their traditional annual fund-raising occasion, the Jefferson”Jackson Day dinners, due to racial hostility toward the two great white Democrats. Jonathan Martin wrote in The New York Times in August that the abandonment of the names of the Democratic Party’s founders

underscore[s] one of the most consequential trends of American politics: Democrats” shift from a union-powered party organized primarily around economic solidarity to one shaped by racial and sexual identity.

A few years down the road, we can expect to see Democrats dynamiting Franklin Delano Roosevelt under the theory of America’s foremost public intellectual, Ta-Nehisi Coates, that the problems of black people today are due to racist redlining by FDR’s Federal Housing Administration.

Coates” lowbrow hate is, of course, deified as liberal simply because his racism is antiwhite. His apotheosis (National Book Award, MacArthur genius grant) is perhaps an extreme case of the current regression away from reason and toward primitive emotions.

If you look around the non-Western world, you can see conservatism in ascendance with little need for this kind of pretense of progressivism. The Muslim Middle East, of course, is beset by the furious holy men of ISIS, who have displaced al-Qaeda by being even more maniacally bigoted.

In much of the rest of the world, fortunately, more responsible leaders hold sway. Paradoxically, the contemporary clamor for diversity is more fulfilled by nationalism than by the homogeneity of globalism.

China has rehabilitated Confucius and looks to Singapore’s late rightist ruler Lee Kuan Yew as his modern oracle. The Japanese are increasingly outspoken about their appreciation for their own culture under ShinzÅ Abe. India is ruled by the Hindu nationalist Narendra Modi. Turkey is controlled by a populist conservative party of Islamist and Ottomanist leanings.

The Russian government has revived some aspects of Czarist ideology to give its people a philosophy after the disastrous failures of secondhand Americanism in the 1990s. In Ukraine, all the fighting spirit is on the extreme nationalist right (although the state is saddled with a cabinet of itinerant globalists and oligarchs).

Without anybody especially noticing, the world has been trending toward the editorial line espoused by Lord Copper, the newspaper baron of The Daily Beast in Evelyn Waugh’s satirical masterpiece Scoop: “The Beast stands for strong mutually antagonistic governments everywhere.”