Stubbing Your Toe While Rushing to Judgment 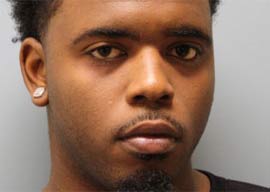 On Sunday, December 30 2018 near Houston, TX at around 6:50AM, a seven-year-old black girl named Jazmine Barnes was shot to death in the backseat of her mother’s car.

Her mother—who is named Laporsha Washington and allegedly has a long history of felony arrests—and her fifteen-year-old sister, Alxis Dilbert (note that all three of these black females managed to be part of the same “family” despite having three different surnames), told police that a white man in a red pickup truck was the killer. They conflicted in other descriptive points, with Laporsha describing the killer as having a pot belly—which might have been hard to see from behind a pickup truck door, I’m just sayin’—and Alexis describing him as looking “sick and skinny.” Using her best broken English, Alxis got even more specific:

He was white and he had blue eyes, and that was it cause he had a hoodie on.

That’s quite an interesting tidbit, seeing as how the shooting occurred a full half-hour before the sun rose in Houston on December 30. Little Alxis may not have a highly developed vocabulary, but apparently nature gifted her with a keen sense of night vision that enabled her to see a driver’s blue eyes in the darkness.

Writing for Salon—which routinely uses the word “white” as if it were synonymous with “evil”—a black alleged academic named D. Watkins broke all known rules of journalism and unquestioningly accepted Washington and Dilbert’s narrative, apparently because it gave him yet another opportunity to shame and scold and demonize white America.

Usually when one is reporting a murder story that has not been adjudicated, common courtesy and established libel laws require one to toss in an “alleged” or “reportedly” or “according to,” but D. Watkins is apparently on a holy mission that transcends journalism’s secular shackles. It doesn’t matter that Watkins was nowhere near the shooting—he pretended he knew not only exactly what happened but also why it happened:

Last Sunday morning, around 7 a.m., 30-year-old LaPorsha Washington sat in her car with a family group in a Walmart parking lot in Cloverleaf, Texas, a suburb of Houston. As she made her way to the exit, a white man, roughly 40 years old with a salt-and-pepper beard and wearing a red hoodie, drew a firearm and emptied rounds into her car….Barnes was being raised in the world where the current administration loves to paint Mexicans or Muslims as the bad guys. But it seems like every time a television is flicked on, there’s a new story about some disgruntled white man expressing rage by shooting at people. Sometimes they call him a loner or tormented soul in need of help — I say call them what they are, domestic terrorists.

Whoa there, Smoky—do we live in the same world? It seems like every time I’m confronted with a racially hysterical news story, there is a manic rush to judge any potential white perpetrator as a rabid, bloodthirsty, hate-marinated psychopath who seeks to prevent black people from rising to the full potential that they amply demonstrate in places such as Haiti and Swaziland and other paradises where white domestic terrorists don’t seek to chop down these beautiful flowers before they can bloom.

“The news outlets that have updated their reports on the murder went out of their way not to identify Mr. Black as black—but his name gives it away.”

Texas Congresswoman Sheila Jackson Lee—infamous for stating that hurricane names are too “lily-white” and that Neil Armstrong planted a flag on Mars—told a mob of hootin’ and hollerin’ co-Negroes to rush to judgment as if they were Usain Bolt in a judge’s wig: “Do not be afraid to call this what it seems to be: a hate crime.”

Houston Texans wide receiver DeAndre Hopkins donated his upcoming paycheck to the Barnes family in their quest to find the evil killer.

A Houston-based, bowtie-wearing black activist who calls himself Deric Muhammad stood outside the Harris County Sheriff’s Office howling about how he believes the shooting was racially motivated.

Trans-black race-baiter Shaun “Talcum X” King, easily the dumbest person to ever be financed by both Harvard and the New York Post, arranged with a lawyer to offer a huge cash bounty for information leading to the arrest and conviction of the “evil coward…white man” who shot and killed Jazmine Barnes.

In February 2017, an eight-year-old black girl named De’Maree Adkins was killed by bullets that hit her as she slept in the backseat of her mom’s car.

Four months later, a 10-month-old black male named Messiah Marshall was shot to death while being held in his father’s arms.

A month after that, a black teen named O’Cyrus Breaux was shot to death at his own birthday party.

In March of 2018, eight-year-old Tristian Hutchins was killed in a drive-by shooting while sitting in a car with his sister.

But there was no equivalent outrage for any of these murders. There were no Twitter hashtags, no black Salon academics, no black Congresswomen, no bowtie-wearing black guys with the surname “Muhammad,” no black superstar athletes, and no white Shaun Kings who pretend they’re black screaming for blood vengeance.

The difference? In each of those cases, the murder suspects were black from the outset.

In this case, the murder suspect was white…for a few days, that is.

Acting on a tip given by none other than Shaun King—I give credit where it’s due, and I’m both surprised and impressed that King was willing to help find the perps even though it demolished his narrative—police arrested 20-year-old Eric Black, Jr. and have charged him with capital murder in the case. Black has reportedly confessed to the crime and said that it was a simple case of mistaken identity—he and his accomplice targeted the wrong vehicle. Black has allegedly fingered 24-year-old Larry Woodruffe as the gunman.

In a bitterly amusing twist, the news outlets that have updated their reports on the murder went out of their way not to identify Mr. Black as black—but his name gives it away.

Laporsha Washington told a news outlet that detectives had contacted her to announce they’d arrested two males in the murder of her child and she added that “the gentlemen were black.”

Yes, she actually referred to the alleged killers of her daughter as “gentlemen,” presumably because they are black.

Sure, little Jazmine remains chronically dead, but many black activists and their white enablers are taking comfort in the fact that she was killed by another black person, just like 90 percent or so of all black murder victims.

Although they are hardly surprised, they certainly seem disappointed.

I am neither surprised nor disappointed—but I’m more than a little disgusted.