Stung by a Flower 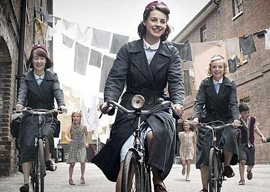 In the February 18 issue of the world’s greatest weekly I wrote that I had fallen madly in love with Jessica Raine, the actress who portrays nurse Jenny in the Sunday-night BBC show Call the Midwife. In the throes of demonic, erotic exhilaration, I may have piled it on a bit thick. So what? If Gordon Brown can ruin the British economy, Tony Blair can take Britain to war based on an outrageous lie, and both bums can still walk around without cuffs on their wrists, surely Taki can walk on air and fly on gossamer wings over someone he’s never met.

My whole point was to renounce today’s so-called sex symbols, those drunken tarts one sees piling out of nightclubs wobbling on their thick ankles and slurring their words as they try to pretend they don’t want their pictures taken. Here was Jessica in all the grace, shyness, and understatement that makes a woman so attractive to the poor little Greek boy, so I went overboard. But nurse Jenny is my ideal woman, and although even I in my reverie was aware that it’s a role and nothing more, I compared her with today’s lot and wept.

“My amulet against women I have wronged in the past obviously doesn’t work.”

Jenny-Jessica was my incarnation of goodness, and her enchanting looks turned me into an erotomaniacal fool. Even worse, I decided to get back to the Spectator’s deputy editor, who had repeatedly made a fool of me by letting me stew on the altar—and with a cardinal waiting to boot—while she amused herself with family and friends in Old Queen Street. So I wrote, and I quote from the greatest Greek writer since Homer, “Goodbye, assistant editor of the Spectator. So long, Keira. Au revoir pour toujours, Rebecca. You’re all through, washed-up, history, curtains, finished.” I swear on John Prescott’s fat head that I meant it.

In an act of unspeakable revenge, the deputy editor not only went ahead and got married and now calls herself Madam, she hunted down Jessica Raine and commissioned a diary from her. It was a rare honor for someone as young as Jessica, who only has one hit under her thespian belt. And the deputy editor knew exactly what she was doing. In a column last week, Jessica Raine admitted being perturbed by what I wrote about her, advised me to cool my jets, and plunged the knife in deeply by suggesting I read some bloody book by some female called How To Be A Woman.