It has to be said that it’s getting a little difficult to keep up with just how many girlfriends David Letterman has had from the show. As I write, the count is up to four. Holly Hester has just appeared out of the woodwork, saying she dated him for a year back in the “90s. There’s some other as-yet-unnamed lady alleged by People magazine, Stephanie Birkitt, who we’ll get to in a moment, and, of course, Letterman now wife, Regina Lasko, whom he met through work as well.

But then again, in this modern world, most of us do meet our mates (whether temporary or permanent) through work, so it’s a little harsh to blame someone for that. In fact, dating through work has become such a part of our society that at least one serious scientist thinks it’s the cause of the rising tide of autism, through a mechanism called “assortative mating” (yes, this serious scientist is named Simon Baron Cohen: he’s the cousin of Sasha, of AliG and Bruno fame).

So if we can’t shout at a man for dating at work before he gets married, what can we do? Shout at him for cruelly abandoning those he has partaken of? Well, given that it appears that Letterman paid Birkitt’s way through law school (yes, after the affair ended and while she was dating someone else) that would also be a tough one to hang on him.

The one real point that I can see us taking away from this highly amusing story is actually a reasonable definition of chutzpah. As we know, Yiddish slang doesn’t really translate directly into English: there are too many unspoken associations inside the language for that. Chutzpah means more than the monumental arrogance required to sell sand to Arabs (which was actually managed after if was said that Saudi sand is the wrong type to make sandbags) or iceboxes to Eskimos (the insulation makes them great for stopping things from freezing apparently)”perhaps the best translation we have is “unmitigated gall.”

But whether we use the English “unmitigated gall” or the Yiddish chutzpah, I think that’s a great description of the position of Robert Halderman, the guy actually accused here (at least, the real one, not the one accused in public opinion). For think of what it was that he allegedly did.

He was living with Stephanie Birkitt, and they had dated for several years after her break-up with Letterman and Halderman’s separation and divorce from his wife. OK, perhaps it’s not entirely to everyone’s moral taste, serial monogamy and living in sin, but it’s hardly uncommon these days. So, this relationship breaks up, and Halderman has possession of Birkitt’s diaries and some other possible proof of her former relationship with Letterman. So he cooks up an idea to get some money: he will confront Letterman with this evidence and thus garner a great big fat check. (This is all of the allegations, as of yet; more may surface in a coming trial.)

From one angle, this looks like a great plan. With the benefit of hindsight, of course, it looks like a terrible one”for Letterman clearly decided that the secret wasn’t worth $2 million so there was no great big fat check, not one that would clear at least.

But think through what Halderman was actually saying again. 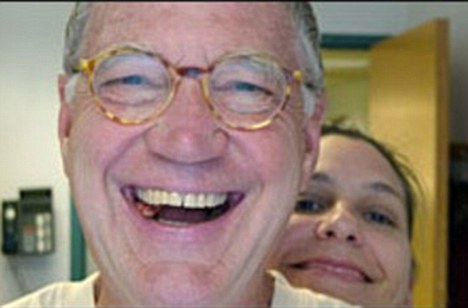 I’m not sure, I can think of a better example of chutzpah than that. Not only trying to blackmail someone over what you yourself are doing but blackmailing them over something that you only know about because you are doing the same thing. With the same person. It’s like turning someone in as a crackhead, your proof being that you shared a crack pipe.

Or maybe I’ve got my languages all mixed up, and it’s not chutzpah at all but the Greek hubris: that pride the Gods endow you with as they set you up for a big fall?