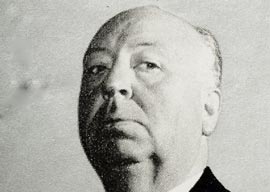 But of our work, the work of our order and in particular the work of this monastery, a part”indeed, the substance”is study, and the preservation of knowledge. Preservation of, I say, not search for, because the property of knowledge, as a divine thing, is that it is complete and has been defined since the beginning, in the perfection of the Word which expresses itself to itself … There is no progress, no revolution of ages, in the history of knowledge, but at most a continuous and sublime recapitulation.

In Umberto Eco’s The Name of the Rose, the blind zealot Jorge of Burgos believes with a fevered intensity that knowledge has reached its limit. There is no need to seek new knowledge, as everything that can be known is already known. Recapitulation is all that is left for mankind.

Which obviously brings us to Alfred Hitchcock. Okay, no, it’s not an obvious progression at all, but I”ll explain. There’s been a great deal of fuss this week over the upcoming HBO premiere of Alfred Hitchcock’s “lost” and “newly discovered” Holocaust film, which has been “restored” by filmmaking genius Brett Ratner (I don”t throw the term genius around lightly, but the man gave us Horrible Bosses and Rush Hour 2). The “lost narration” has been recorded by Helena Bonham Carter.

In fact, that Hitchcock film was as “lost” as a Kim Kardashian sex tape. The “newly discovered” Alfred Hitchcock Holocaust film premiering on HBO January 26 as Night Will Fall is also the “newly discovered” Alfred Hitchcock Holocaust film that premiered on PBS in 1985 as Memory of the Camps. That one was “restored” by producer Michael Sullivan (who gave us the TV series Growing Pains and the cinema classic Ninja Assassins), with the “lost narration” recorded by British actor Trevor Howard.

“But it had been out of circulation for a while, so it was ripe for being billed as a new discovery. And the media uncritically ate it up.”

Forty years ago, Allied troops invaded Germany and liberated Nazi death camps. They found unspeakable horrors which still haunt the world’s conscience. FRONTLINE presents a 1945 film made by British and American film crews who were with the troops liberating the camps. The film was directed in part by Alfred Hitchcock and was broadcast for the first time in its entirety on FRONTLINE.  “PBS, 1985

A documentary about the liberation of the Nazi concentration camps directed by Alfred Hitchcock is to be shown in complete form for the first time in 70 years. The movie, Hitchcock’s only factual work, is made up of film taken by army cameramen as the allies liberated the camps in 1945. The work, with a script by Richard Crossman, who later became a Labour cabinet minister, has lain uncompleted in the archives since the government prevented it from being shown in 1945.  “The Sunday Times, 2015

“An unseen 1945 documentary about Belsen is finally to be screened,” heralded the Guardian on Thursday. Unseen indeed, unless you count the 1985 PBS premiere, the panel discussion that followed, the countless repeats, and the fact that PBS has it available to purchase from its website or watch online.

Welcome to the world of Holocaust scammers. I know that world well, as, for a period of time after 1997, I was one. And I was an innovator of the “lost Holocaust film” meme.

The Daily Beast calls the “lost” Hitchcock film “the greatest documentary never made.” The Toronto Star called my “lost” Holocaust film Nuremberg “one of the most historic films never seen.” News hacks, like career sitcom writers, love nothing more than to recycle dialogue. In 1996, I discovered the 1948 documentary film Nuremberg. And by “discovered,” I mean that via a series of faxes, I helped Raye Farr of the U.S. Holocaust Memorial Museum identify the catalog number of Nuremberg in the National Archives.

And to think, poor fools like Howard Carter had to crawl through dirt for their historical discoveries.

Having fled Holocaust revisionism due to the bounty put on my head by the Jewish Defense League, and badly in need of money, I immediately began marketing Nuremberg as the great “lost” Holocaust film. Back in the late 40s, the film had been a pet project of FDR New Deal shill Pare Lorentz, and soon-to-be big-time TV producer Stuart Schulberg (The Today Show). Farr and I had indeed located it in the National Archives, but it was far from a “discovery.” It had been shown in theaters in Europe in the 40s, and on TV in the U.S. in the 60s.

But it had been out of circulation for a while, so it was ripe for being billed as a new discovery. And the media uncritically ate it up. I released it in 1997 (it’s a public domain film, but I spent about $2,000 to have the print cleaned up so I could copyright it in that form). After speaking with Lorentz’s widow, I learned of a few edits he wished he”d made. Ah-ha! Director’s cut! I rereleased the film in 2007. The screening at the Garden State Film Festival was heralded as a festival highlight by the New York Times (March 30, 2008). Nuremberg won best feature-length documentary.

Much to my amusement, Stuart Schulberg’s daughter Sandra was working the same angle, and was pissed as hell that I beat her to it. Her “discovered” version of Nuremberg didn”t have its first-time-ever premiere until 2010. And then again in 2011, because … Holocaust!