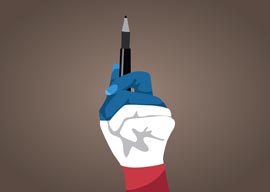 Reactionary author Michel Houellebecq’s novel about an Islamic takeover of France, Submission, was published the day of the slaughter at Charlie Hebdo. In fact, the satirical publication’s cover that bloody morning was a cartoon of the notoriously decrepit-looking Houellebecq prophesying, “In 2015, I lose my teeth. In 2022, I observe Ramadan!”

Perhaps continental Europe’s most talked-about novelist this century, Houellebecq (a complicated-looking name pronounced, simply enough, “WELL-beck”) is representative of the rise of the right as a cultural force. The editor of the leftist Liberation newspaper complained that Submission “will mark the date in the history of ideas on which the ideas of the extreme right made their entrance in high literature.” Houellebecq has described himself in his usual half-joking style as “Nihilist, reactionary, cynic, racist, shameless misogynist: to lump me in with the rather unsavory family of “right-wing anarchists” would be to give me too much credit; basically, I”m just a redneck.”

In reality, Houellebecq is an autodidact with an immense love of French literature. But he missed out on the usual educational and career path of French intellectuals, instead studying agronomy in college and going to work with computers, which he hated. In his 1990s novels, Whatever and The Elementary Particles, he more or less introduced to literature the now familiar character of the sexually frustrated computer programmer. Houellebecq has been a major influence on the sexual realist wing of the American blogosphere, such as Heartiste.

Submission has now finally been published in America, and it turns out to be worth the nine-month wait. The superb translation by Lorin Stein, the editor of George Plimpton‘s old literary magazine The Paris Review, is deadpan hilarious.

“Houellebecq’s ambiguity may be not just a masterly literary strategy, but also a legal one to keep him out of jail.”

And this tale of how the French elite will collaborate with their new Islamic rulers as egregiously as their predecessors collaborated with the Germans has recently been made even more timely by the vigor with which Chancellor Merkel’s Germany has decided to try to outrace France to national suicide.

Numerous English-language reviewers have registered their relief that Submission is not as “Islamophobic” as they had feared. In fact, Submission‘s hero, a self-centered professor of French literature, eventually converts to Islam after he’s offered in exchange his old job back, a big boost in salary (due to Saudi Arabia buying the Sorbonne), and, best of all, arranged marriages with three nubile coeds.

Is Submission a dystopian novel or a utopian one, as Houellebecq sometimes maintains in interviews? Keep in mind that France has nothing resembling a First Amendment, so Houellebecq’s ambiguity may be not just a masterly literary strategy, but also a legal one to keep him out of jail. It’s not wholly irrelevant that the current leader in the polls for the first round of the 2017 French presidential election, Marine Le Pen of the National Front, is right now on trial and could be sentenced to a year in prison for criticizing the Islamification of France.

Houellebecq himself was put on trial in 2002 for calling Islam “the stupidest religion.” He was acquitted, but exiled himself to Ireland for several years.

Moreover, Muslim extremists in Europe sometimes murder celebrities who dare dis them, such as Theo van Gogh, who was stabbed to death in 2004 shortly after producing a short film entitled, probably not coincidentally, Submission.

The basic plot of Houellebecq’s Submission is by now well-known: In the 2022 French presidential election, Le Pen wins the first round with 34 percent. But in a surprise, the suave, moderate Muslim candidate, Mohammed Ben Abbes, founder of the new Islamic Brotherhood party, slips into the second round with 22 percent, just ahead of Socialist warhorse Manuel Valls. (In real life, Valls denounced Submission: “France is not Michel Houellebecq, it’s not intolerance, hatred, fear.”)

Granted, nobody knows exactly what the Muslim percentage of France is, but 2022 seems too soon, as Houellebecq has admitted. On the other hand, in the wake of Ms. Merkel launching the Camp of the Saints against her own continent, it’s clear that much of Submission is intentionally understated.

When the Muslim Brotherhood declare that they aren”t interested in the traditionally crucial ministries of finance and foreign affairs, desiring only to control education, the Socialists quickly form an alliance with the Brotherhood against the hated National Front. Eventually the center-right UMP party of Nicolas Sarkozy and the centrist Catholic FranÃ§ois Bayrou join the grand coalition against the National Front. When the apolitical protagonist inquires why, a well-informed secret policeman assures him:

What the UMP wants, and the Socialists, too, is for France to disappear”to be integrated into a European federation. Obviously, this isn”t popular with the voters, but for years the party leaders have managed to sweep it under the rug.

Territoriality is basic human nature. The European elite strategy has been to demonize this natural urge among European men while hoping that this contrived attitude rubs off on Muslim immigrants through some unexplained form of moral osmosis.

How’s that working out so far?

With the backing of all respectable French politicians, the Muslim candidate defeats Le Pen in a landslide. After all, the important thing in politics is not to defend your country, but to defeat your fellow countrymen, even if that involves selling out to outsiders.

One clever aspect of Submission is that Houellebecq has crafted it to have his repulsive, misanthropic Houellebecqian narrator portray Islam as a positive force for France and Europe. Ben Abbes is seen as the second coming of Emperor Augustus, reunifying the Mediterranean world.