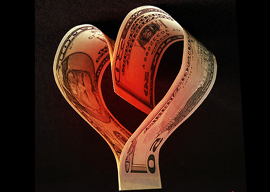 A restaurant called Taboo is one my favorite haunts in one of my favorite American cities, Palm Beach, FL. After years of occasional visits, I noticed I was inevitably ushered into the same section. When a local throwaway newspaper featured “A Sociological Map of Taboo,” I realized I was being placed in a section called “Poets and Philosophers.”

Although I felt honored, another section caught my attention: “Shepherds and Their Lambs.”

Palm Beach is rife with shepherds and lambs: mentors, protÃ©gÃ©s, protÃ©gÃ©es, and helpful folk of all sorts. Organizations with names such as the “Millionaire’s Club” work to bring together the older wealthy with younger, more beautiful folk who need guidance and support.

What is conducted with snickers and knowing leers in Palm Beach becomes ever more public elsewhere in South Florida. Miami-based Seeking Arrangement candidly describes their business:

“Is a sexual relationship that is openly about cash simply prostitution under another name?”

Let’s face it… It’s human nature for successful people to want younger and more attractive partners. It’s also natural for younger men & women to seek out more experienced, sophisticated, wealthy and generous partners, specifically those who have the means of providing them with comforts and luxuries.

The practice has existed as long as there have been older people of wealth, power, or prestige and younger folk willing, able, or forced to avail themselves of the former’s largesse. In many cultures pederasty has been a recognized part of intergenerational relationships”even down to DC’s government culture, as many graduates of the capital’s various intern programs could tell you. From the Paris of Gigi to the Quadroon Balls of New Orleans, the taking of younger mistresses by wealthy older men had a ritual life all its own; in some ways Japan’s geisha culture reflects this.