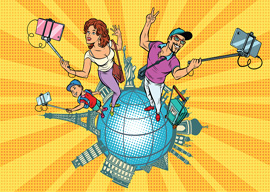 Mail-order catalogs (except of antiquarian books) are not my favorite reading, and yet we can learn something from them, even from those that hold no other interest for us. For example, the other day I looked into such a catalog at my mother-in-law’s—if there is some reading matter lying about and I am at a loose end for a few seconds for something to do, I pick it up and read it, whatever it may be. Somerset Maugham said he would rather read a train timetable than nothing at all, and I am of like mind—or psychopathology.

There was a whole section of the catalog I picked up in which the models obscured their faces with their phones by taking selfies. Unlike most models these days, who affect a look of unutterable misery (perhaps it is not an affectation, given that they are not allowed to eat and are treated like slaves), the models taking selfies looked very happy, at least in those pictures in which it was possible to discern their facial expression. Perhaps, then, it is in looking at oneself that true happiness lies, at least for some people.

“If the camera never lied, if it showed me as I truly am, I would come out much better in photos.”

Certainly, at every famous tourist site these days one sees whole troops of people taking pictures of themselves: me and the Mona Lisa, me and the Eiffel Tower, me and Big Ben, me and the Empire State Building, me and Mount Everest. It is the me that counts in these photos, of course; no one’s friends really care about Mount Everest, and even concern for the me is relative. A selfie with Mount Everest is like an alibi when one has been accused of claiming to have been there without having been there; the proof is in one’s phone, although it must be admitted that these days, with an ability to alter photos at will that would have brought joy to Stalin’s heart, anything can be arranged. I read in the memoir of a French model that, having starved mannequins to the size of minus 6, they are fattened up a little afterwards by computer at the printing stage: a remarkable testimony to mankind’s capacity to combine wickedness with stupidity.

The selfie is an example of the new social contract brought about by the social media: You pretend to be interested in me if I pretend to be interested in you. Thus, I agree to look at your selfie at Machu Picchu if you agree to look at mine at Angkor Wat. And this, after all, is as it should be, because it is a long way to go to either of those if no one believes you have been. A classic book is a book that everyone wishes he had read; a wonder of the world is a place at which everyone wishes he had been photographed.

I do not take selfies, but (if I am to tell the truth) it is not because I am appalled at the vacuity doing so seems to require, or at least to call forth: Sheep in a field are more like Rodin’s Thinker than are people who hold their phones on those ridiculous sticks before their faces. No, the problem is that, where the camera and I are concerned, it is not that it never lies, but that it never tells the truth.

I am always appalled by its results. I do not look like that when I glance in the mirror: I look far younger, less bald, wrinkled, ugly in short. I conclude, of course, that I lack that mysterious quality that only some lucky people have: I am not photogenic. If the camera never lied, if it showed me as I truly am, I would come out much better in photos.

I think it was the French-Romanian writer Emil Cioran who said that if a man knew that someone would one day write a biography of him, he would cease to live; in other words, it would paralyze him. In like fashion, if I thought that people would photograph me, I would stay indoors—the millions of spy cameras everywhere don’t count, no one looks at what they have recorded until there has been a murder or a terrorist attack (and then everyone is mostly unrecognizable).