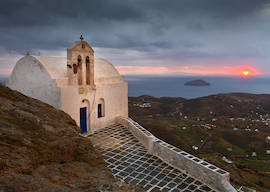 He went away to fight and the war lasted 10 years. He missed his wife, but he didn’t worry one bit. She was in love with him and she was known for her virtue. (Those were the days.) Sailing west, he stopped in Serifos, a beautiful but rugged island in the Cyclades. Soon he had a problem, a very serious one, and his name was Polyphemus. The Cyclops was a baddie and was about to slay the Greek crew and eat them when Odysseus speared him in the eye, the only eye the giant had, and that was that. The Cyclops’ throne is still here in the shape of a large wall high up in the upper Hora, as that part of Serifos is known. Although I was always on the side of my fellow Ionian—Odysseus was King of Ithaca, the Taki clan is from Zante—I did not climb up and inspect the throne. It has nothing to do with mythology and all to do with being magnanimous in victory. To lose one eye when one is all one’s got has to be a hell of a downer.

Never mind. Serifos is simply wonderful. No “cool” people here, no Hollywood garbage, no international trash, except for one horror boat whose construction was a major crime against the sea, its ugliness, however, mitigated as its occupants emerged late in the afternoon. At first I thought it must be an animal rescue boat transporting gorillas bred in Europe to Africa. No such luck. They were Saudis or perhaps Russian oligarchs, but they sure were ugly. I imagine someone told them about Cyclops and how ugly that poor monster happened to be, so they decided to come here and look good by comparison. Mind you, I’m just guessing.

“They were Saudis or perhaps Russian oligarchs, but they sure were ugly.”

Serifos has a mixed history. Although it has not produced any poets or writers, the first Greek industrial strike took place on this island back in 1916. A French company mined the iron ore deposits on the island, but the conditions were known as inhuman even back then. In August of that year the Greek miners had had enough. They went on strike and the fuzz was sent from the mainland to teach them a lesson they would not forget. Four miners were shot dead and two cops lynched in return by the enraged but starving miners. The mines were blown up and the frogs decided to go south—to South Africa, to be exact. The graves of the four miners under a monument commemorating their deaths are prominently displayed. I asked about the fuzz but was met with blank stares. Such are the joys of being in law enforcement. The only ones who miss them are their families.

Before I got on Puritan, the magnificent 1930 Alden-built schooner, I dined with three Greek journalists of Kathimerini’s supplement, Mancode. All three were confident that after four years of hard-left socialism, things are bound to improve. The socialists had overtaxed business, and that’s a no-no as far as growth and profits are concerned. Tell me a business that can survive value-added tax of 24 percent, social security contributions of 46 percent, and 29 percent tax from the very first euro of earnings, and I’ll tell you how to go bust in one easy lesson. The left also allowed crime to hinder businesses by keeping people from shopping except in the middle of the day. Mom-and-pop stores are the heart and soul of Greek trade, hence the high taxation and fear of violent crime turned the economy south in no time. Now the hope is that things will change.

No sooner had the new government been sworn in, than the media began to grumble. Only five female ministers were named to the 51-member cabinet, giving the opportunity to some shrill feminists to start screaming about a society still dominated by patriarchal values. Well, go to any island and you’ll see the men working and the women holding forth as mothers and housewives. On Puritan I have the mother of my children, my son and daughter, my son-in-law, and three grandchildren, Taki, Maria, and Antonius, aged eight months. For some strange reason I cannot breastfeed the baby, so my daughter’s doing it. The mother of my children looks after the other two because there was no room on board for a nanny. Does that make us male chauvinist pigs? I suppose so, but the crew of seven has promised to learn to breastfeed, and soon.

My idea of beauty under sail is sitting in a magnificent classic-styled boat extremely leaning to starboard or portside, slicing the waves and hearing the wind howling. We did just that for close to six hours under full sail and averaging 10 knots. The “meltemi,” the summer wind that never lets up and drives the hookers on board mega-monster yachts to miss their periods, has had quite a summer. It started early and promises to blow like hell until mid-September. Goody, goody gumdrops. The gynecologists back home will have a field day. As you read this, I shall be having a long weekend on a private island celebrating Pugs Club. We are going to be seven of us, drinking, swimming, listening to martial music, and missing our commodore Tim Hoare. Incidentally, Sir Bob Geldof was talked out of trying to swim to Greece to save trip money.