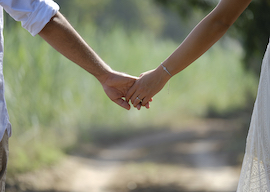 The only true love is summer love, as the saying by Giacomo Casanova goes. Actually it’s mine, as the Venetian was too slick to differentiate between love seasons. The reason I find summer love the truest is because it has its limits. Come September and the return to school, job, city, town, whatever, summer love tends to dim, as cold hard reality sets in. We all first fell in love in summer, no ifs or buts about it. It is during summer when we first viewed our beloved and began to dream and write love letters. It is during summer when we wrote what John Simon called missives, peppered with declarations of adoration, brimming with anticipation, glorying in fulfillment. Vladimir Nabokov, whose son was a friend of mine, was a terrific “coureur,” and wrote beautiful love letters to his wife while he was out chasing women. Headlong pursuits and sophomoric ecstasies aside, he always referred to summer in his epistles. “My sun, my pink sky, my sunny rainbow, my blue sky, my soft white cloud…” Men might cheat in winter, but they fall in love in summer. Amour fou is summery, mendacious affairs are wintry ones.

My first real love was on board a transatlantic liner back in 1952. I was just 15 and she was called Isla and she was Texan, traveling with her parents—as I was with mine—from New York to Cannes. She was racy, very lovely, boyish, wearing a yellow skirt that matched the funnels on the deck. She had green eyes, tender and jovial. We swore eternal love, then never wrote to, spoke to, or saw each other again. She is now in her 80s, if she’s still alive. See what I mean about the cold reality that follows summer?

That same summer I met the recently deceased Carlos Fix’s first wife, back then still a Miss Goulandris, and I got a kiss out of her. She was two years older than me at 17. Ah, the allure of the older woman under the sheltering palm trees of the French Riviera. The next summer it got worse. I was now 16 and raring to go. Caroline came into my life—slim, golden, slant-eyed, in her boys’ felt hat. We had the time of our lives, but then came time for me to go back to school and she to the great country house in England. The day she left I met Estelle, and never saw Caroline again.

“Nothing is more vivid than the start of a love affair, especially in summer.”

Estelle’s father was the Swedish ambassador to Paris and did not approve of her lifestyle. But we stayed in touch because she came over with him to a U.N. meeting and I came down from school to see her. It was the first time I’d seen her dressed, all in woolies and stuff, and it was not the same as the bikini I was used to. Winter does funny things to summer loves. Estelle and I went on seeing each other occasionally as we grew up, drinking, flirting, getting into trouble, until one day she killed herself in Camargue. I had no idea such a beautiful and fun young woman could suffer from depression, my lack of foresight I now blame on the selfishness of youth.

There were no melancholy Swedes in the following years, the early to mid-’50s, when I discovered the Greek waters. Mind you, Greek waters back then meant Glyfada, and they were cleaner then than any Mykonos or Kimolos beach can brag about today. As was my first Greek summer love, who turned out to be a French nightclub singer by the name of Maria (Vincent). She appeared every night at the best nightclub of its time, Argentina, located on the northern side of the seaside road that led to Glyfada. Maria was voluble as a singer, and also very voluble in later nighttime endeavors. I was 17 by then and rather proud to be allowed to escort her into the night after her nightly double appearances at Argentina, where the tiny Athenian society gathered nightly. (The Hippodrome, on Syngrou’s end, was for more formal occasions and required suits and, at times, smoking attire.) Maria then disappeared. I was informed that a Greek industrialist (Kythara-Petalouda and shipowner Metropolitan Shipping) had taken her with him on his new sailing boat. The boat was Aries, the largest yacht built after the war at Camper & Nicholsons, and the man was called John Theodoracopulos, my father. He was 49 years old. I did not take it too badly because yet again it was a summer-love thing, and I had to go back to school. Forty-some years later I mentioned it to my father, but he didn’t remember a thing. I guess it was summer love for him also.

Greek summers then became a habit, especially after the one that followed. I met a Greek woman who had been nicked at the post by Evi Mavraki, who later placed third in the Miss World contest. The young woman I fell for was called Eva, and she had the kind of figure Raymond Chandler described as an hourglass; a bishop would break a cathedral’s stained glass window to get to it. Used to slender, boyish, American- and English-type girls’ figures, Eva’s body drove me insane. We did nothing but make love, so much in fact that when I competed in the Greek national tennis championships, I almost lost to someone who could not play at all, such was my lack of coordination. Thus ended the summer of 1955. I never saw Eva again, nor did I return to Greece for a while. I was off on the tennis circuit and to university, and, I suppose, to manhood. Love and loves became a year-round obsession, summer loves, however, being chiseled in stone in my memory. They remain rarefied, fragile museum pieces, handled with hushed reverence. Romantic love is by its nature delusional and brief, a fine madness. It’s an age-old antidepressant. But summer love, for reasons already expressed, is the best. Nothing is more vivid than the start of a love affair, especially in summer. Finally, a last piece of advice from an oldie: Never, but never, play cards or gamble with a man called Doc, and do not fall in love with a woman called Baby.