Summers in the Hamptons 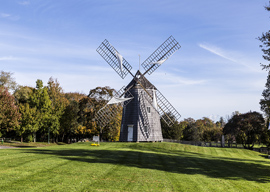 The feeling of summertime abandonment is here—the Hamptons are overflowing with mouth-frothing groupies looking for celebrities, and the Long Island Expressway is replete with hissy fits by enraged drivers stuck in traffic for hours on end. One reason I gave up a beautiful estate in Southampton, L.I., was the inability to get there within, say, a lady’s yes and an eventual refusal due to fatigue and the boredom of sitting in a car watching other stationary cars. The Hamptons have now become an artistic pit stop for the summer. The nouveaux riches need art as badly as #MeToo needs rapists, it justifies their showing off. A feverish peak is reached sometime in July—when the mosquito invasion is at its height—with woods and gardens taken over by art installations and performances ranging from the freakish to the horrible. Here’s an example or two of the rare and great art that was exhibited last year alone: a man feigning terror while trapped in a tank of water; a disrobed woman submerged in a trough of molasses; and two females relieving themselves on—yes, you guessed it—a man. Boy, thank God Edward Hopper is no longer with us; he would have died of envy, as would the other great, Norman Rockwell.

Yes sir, the Hamptons are worth visiting not only for the art but also for the cast of highfliers of Wall Street, whose names I cannot mention in the elegant pages of Takimag, such is the stench that emanates from some of them. I was up there for Memorial Day weekend and stayed at my fraternity house—actually, it’s a club and a perfect place to stay and see people who are not into the art I just mentioned—and for some strange reason we did not talk about bentwood chairs on tubular copper bases or carved-wood ancestral figures from Africa, apparently the latest craze of the artsy-fartsy crowd.

“Every vulgar nouveau riche in the Bagel wants to spend summers in the Hamptons.”

Once upon a time the Hamptons were a magical place—like Scott Fitzgerald’s French Riviera—a place where beauty, wealth, and birth ruled the roost. The light was special and it drew the artists, the kind who paint on canvases and can actually draw an apple if need be, now extinct. Just like in the south of France, it was too good to last. The ignorant, the base, the vulgar, and the newly rich arrived with a vengeance and bought up the potato fields and put up mansions even the Hilton family would find “de trop.” Many of these new arrivals were stupendously successful in business but otherwise talent-free, their epigrammatic wit limited to two words: “How much?” Mind you, the place is not as bad as the south of France because the oligarchs and the Saudis have kept away. Nor do the Hamptons have the crime of the Riviera, as the local police who are mostly Polish are not overly concerned with the human rights of drunks behind the wheel or slobs who spit on the sidewalk. This is the good news. The bad is that every vulgar nouveau riche in the Bagel wants to spend summers in the Hamptons. The vulgar ones used to go to the Catskills; now they want to live on South Main Street, near Taki, who vacated the place twenty years ago. (Yet another catastrophic mistake on my part. Now I look out at cows and have to mix with Geneva con men and crooks, many of whom are members of the Eagle Club.)

Mind you, I would have moved to Germany long ago if it weren’t for that plebeian functionary Merkel, who turned the country over to the brown hairy types who have so enhanced Libya, Lebanon, Niger, Nigeria, Sudan, and points south. Baden-Baden was a beautiful resort when I was young and played the tennis tournament every September. One also got lucky there, and I don’t mean winning let cords. Last time I was there the people were badly dressed—socks and sandals—and the women old and virtuous, fidelity being the last atonement of a fading woman. Poor little Greek boy, what is to become of me? I should build another Bushido, but women refuse to be picked up by me because of my age, and I don’t like pros, not in sport nor in the sack. I used to but no longer, and Madame Claude, who had the best girls, is also long gone. And a boat is only good for picking up women. One puts on weight, one drinks too much, one sits too much, one gets too much sun. Poor little Taki—as that fat prick Sartre said, hell is other people, who murmur, gasp, paw, grasp, and talk too loud in public places. Last week I dined with Michael Mailer and Thomas Pompidou and two more couples, the noise decibel so high we actually ordered in sign language with the waiter. The latter was gay and extremely nice but took a shine to Michael and made goo-goo eyes at him all evening. I wanted to discuss politics with Pompidou but never got the chance. It was just too noisy. Reflective surfaces on walls like mirrors or glass cause sound to reflect like light does. And Noo Yawkers are already among the loudest in the world. Dining out has become a danger to one’s health and leads to certain loss of hearing. Poor little me, what will become of me?