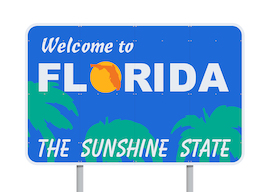 The president and the former mayor both have homes in the Sunshine State and already spend much of the year down south.

Sources tell me the two are planning to give up their New York State residency because it is clear the state faces huge budget problems and will continue raising taxes, though New York is already the highest-taxed state in the nation.

They will join the 1.2 million New Yorkers who have left since 2010, an exodus that has increased in pace and scope since Trump’s tax reform limited the deductibility of state and local taxes.

Florida has no income tax, and tax avoiders can claim Florida residency as long as they spend fewer than 183 days in N.Y.

You might wonder where a man like me would hear a bombshell like this. It dropped into my lap the other night at Omar’s, a louche lounge on the Upper East Side where the rosé was flowing, compliments of Whispering Angel.

I’m not going to name my sources, but I can say the crowd included Martha Stewart, Kimberly Guilfoyle, and real estate developers Joe Farrell and Harry Dubin.

Though befuddled by wine and distracted by an array of dolled-up divorcées, my ears pricked up when the Trump/Giuliani escape from New York was discussed.

You might be wondering now, as am I, why would Trump do anything to avoid taxes, if, as the mainstream media keeps reporting, he doesn’t pay any taxes? Could that be fake news? In any case, he’ll have to pay taxes on his White House pension.

The move to Florida will help him carry the swing state in 2020, a must for his reelection. It will also tweak the nose of Gov. Andrew Cuomo, who preaches fiscal restraint but raises taxes and spending each year as predictably as the cherry trees bloom in Central Park and the Knicks miss the playoffs.

Cuomo recently blamed a $2.3 billion budget shortfall on the exodus of high-earning taxpayers.

Trump and Giuliani’s feelings toward New York’s clownish mayor Bill de Blasio must be even harsher. Not even progressives can stomach the nation’s most pathetic presidential candidate.

President Trump has an added incentive to get out of Dodge—diversity jurisdiction, the law in civil cases that precludes an out-of-state citizen from being sued in New York State courts for more than $75,000. Those cases get sent to federal court.

In Trump’s case, with the N.Y. state attorney general looking for every and any cause of action, Trump would do better in federal court, especially if he can pack the panels with conservatives.

Derek Jeter had the idea long before Donald and Rudy. The Yankee shortstop, who had a home in Florida and played spring training there, claimed residency for the years 2001–2003. But the feds didn’t buy it, citing his substantial in-season presence in the Bronx and his apartment in the Trump World Towers.

The two sides didn’t reach a top-secret settlement until 2007. Jeter has since sold his apartment and become a Florida resident.

Professional athletes are wise to the ways of the taxman. When LeBron James was deciding where to go when he left Cleveland the first time, accountants pointed out that he would forfeit about $12 million by coming to the Knicks. He went to the Miami Heat, a team located in…Florida.

The only reason any free agent comes to a New York team is because he knows he’ll be able to offset his higher taxes with bigger endorsement contracts.

Come on, Kevin Durant. We promise it’s worth it, cross our hearts and hope to die.