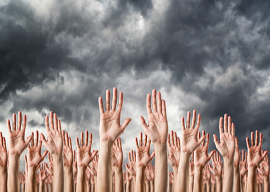 Is it fair to say the liberal mentality created this need to surrender?

I will lay the blame right in its lap. When you tell people they can”t help themselves and that they”re children, you weaken them to a point where three feet away is life and they can”t see it because they”re too scared.

It’s like the bleating sheep from Animal Farm. You suggest anything that strays from the narrative and this chorus of bleats comes to drown you out. This attack didn”t happen by accident.

I went to Paris after the attacks and was disgusted by the lack of rage. They didn”t blame Islam. In fact, many blamed the Jews. They seemed more concerned with us promoting xenophobia than laying blame on the terrorists.

I hung out with plenty of Parisians who were fucking pissed off, but it was mostly cops and military. During the attack, one cop finally realized it wasn”t a hostage situation and yelled out, “It’s a turkey shoot” as he charged in, holding his gun. He got shot right through the hand and into the neck and kept going. He took a terrorist out, chased another one into the hallway, who then blew himself up, and did it to another guy, who blew himself up on stage. Our amplifiers were a gory mess.

Did that cop live?

Yes, I met him in triage. I hung out with him. Great guy.

You went to the hospital?

I had pieces of teeth and human bone pulled out of my face. A girl got shot right next to me by the shooter at the top of the stairs who I had met earlier. She stepped one step in front of me and her head just exploded. It blew pieces of her teeth and skull into my face.

Why don”t we hear about this?

Do you think a percentage of the security staff was Muslim?

I know they were. Look, security guards backstage are notorious for being dicks. They check your ID every few minutes and nobody goes back and forth without being checked, even if you”re in the band. This guy didn”t care what we did. He didn”t even look at me.

The only time he seemed remotely interested in us was when he said to my girlfriend, “Do you speak French?” and “Where are you from?” She said she was from Texas and he was getting frustrated because that’s not what he meant. Then she said, “I”m American” and he lost interest. I honestly think he was trying to determine if she was Arab or not. She’s Mexican and she could easily pass for Lebanese and I think he was going to warn her if she was Muslim.

I kept opening up the back door to smoke and that’s usually a big no-no because of the sound ordinances. I”ve played there before and opening up that door to smoke got you in big trouble. This time, the security guy walks right past me and anxiously looks down the alleyway in either direction.

Maybe one of the reasons the cops are so much more pragmatic about this threat is that they are the ones who have to go into Les Banlieues and confront these people. NaÃ¯vetÃ© is a luxury they can”t afford.

When the cops went in after the attack, they shut down, what, 450 mosques? They found recruitment material in every single one of them. What the fuck is wrong with us that we don”t know about that?

Parisians think everyone is innocent, but the cops don”t. They even investigated you.

I was a person of interest, yes. They interrogated me for four days. I ended up helping them a lot by getting cell-phone footage. It was the cops and the FBI who asked me about the promoter and the security. This isn”t something I brought up to them.

We had eight police officers in our audience that night. They all had the same conversation with their wives, which was “Should I bring my gun or not?” All of them said no. When we went back and played Paris again they stood in the same places they stood at the original show and they opened their jackets and showed me their guns as if to say, “Not tonight, motherfucker.” It was beautiful.

Islam is crying wolf about Islamophobia in order to anesthetize us and make us easier prey.

They know there’s a whole group of white kids out there who are stupid and blind. You have these affluent white kids who have grown up in a liberal curriculum from the time they were in kindergarten, inundated with these lofty notions that are just hot air. Look at where it’s getting them.