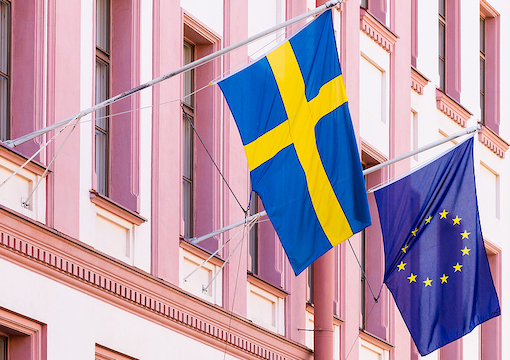 When the telling of jokes was still part of European culture, racial and ethnic traits were often a key ingredient, and comedians thrived on national stereotypes. A perfect example is the gag about the tragic sinking of a Scandinavian ferry, leaving only six survivors in a lifeboat: two Danes, two Finns, and two Swedes. After a day or so, the Danes can’t resist each other and begin making love. Another day passes, the two Finns accuse each other of some slight, and a knife fight ensues. A fortnight later, one of the Swedes turns to the other and says, “Hello, my name is Sven Svensson.”

Whether or not the descendants of Vikings now prefer IKEA furniture and board games to longboats and pillaging, anyone tempted to call modern-day Sweden boring may want to catch up. Sweden’s murder rate is increasing steadily, its rape figures are the worst in Europe, and escalating gang violence includes hand-grenade attacks on a near-daily basis. And it is not Sven Svensson and his homeboys causing the trouble. Sweden’s population is 10.5 million (compare that with London at 9.5 million and New York City at 8.5). But the figure that the political class has been trying and failing to sweeten for the public is that 25 percent of that population are foreign-born.

As with all the lab-rat European countries that followed Germany’s lead in 2015 and took in untrammeled immigration, the problem of integration presents as a paradox. The Swedish authorities parade integration as a social goal, whereas the immigrants themselves have no interest in assimilation with anyone except their own countrymen. For the Swedish establishment, ghettos are a bug in the software, while for the immigrants themselves they are a feature. Of course, any failure to integrate must be seen against the relative scale of the task. In 2015, E.U. immigration year zero, Sweden accepted more immigrants per capita than any other European nation, and ordinary Swedes are starting to notice.

“Anyone tempted to call modern-day Sweden boring may want to catch up.”

September’s general election saw Sweden fall in line with fellow dissident Europeans Hungary and Italy in paying attention to public concern with immigration. Swedes have tired not just of accelerating immigrant crime but of the fact that they themselves are being blamed for the rise in trouble. Where key coalition leader Jimmie Åkesson of Sweden Democrats (SD) states that government has failed to prioritize the needs of Swedish people, outgoing center-leftist Prime Minister Magdalyna Andersson lays the blame at the failure of Swedish society to integrate its guests, a message that is beginning to tire.

The Swedish media are no different from their European colleagues in their branding of any political agent critical of immigration as “right-wing,” with all its pejorative weight and attendant media blackout. This enforced obscurity seemed the fate of the Sweden Democrats before the very immigrants that concern Åkesson’s party came to his rescue as a cause. Åkesson will never be Prime Minister, at least not in this electoral cycle, but his party is providing the agenda the moderates are being forced to follow. And when I say “moderates,” I mean, among others, Moderata Samlingspartiet, which translates as “The Moderate Party,” which the Swedes actually have. As a thing.

Led by unrelenting immigration, European electorates are beginning to follow suit. The familiar pattern forming sees an unwillingness of center-left incumbent parties even to staunch immigration, and this lack of action is leading to an unavoidably equal and opposite reaction. A right-of-center response is obviously called for to satisfy that pesky electorate, but first any credible opposition must sanitize itself by shedding anything questionable in its past. And so, just as with Marine Le Pen and the expulsion from Front National of her father—and take your jackboots with you, Papa!—and Georgia Meloni with the ghost of Mussolini, so too Sweden Democrats must disinfect their “neo-Nazi” past before triangulating any necessary coalition.

From the birth of Sweden Democrats in the late 1980s, the party has had both ghosts and unquiet graves. Nazism has a curious niche in Sweden, the country having been (supposedly) neutral during World War II, but SD have unpleasant specters walking the halls and have had to clean house. And if you have ever been inside a Swedish house, you know that they are very clean indeed. And Swedes will insist you take your shoes off before entering their dwellings, which gives them something in common with their new guests.

If the Islamic occupation of Europe is underway, then Sweden is a main redoubt. The setting up of local Islamist parties, and the resultant control of local councils, is now standard operating procedure across Europe, and it also allows Islamic factions to operate by proxy in Sweden. The Islamist Nyans (Nuance) Party was founded by a Turkish immigrant to Sweden in 2001 and scored surprising figures in this September’s elections. Party leader Mikail Yüksel is connected with Turkish President Recep Tayyip Erdoğan, a man always keen to keep his contact book up to date among the growing micro-caliphates of Middle Europe.

And successful Islamism on Sweden’s political landscape is not confined to Nyans, with Somalian Leila Ali Elmi taking her seat in parliament after a shock win in September. If the Swedish people are in any doubt as to Ms. Elmi’s allegiances, this hijab-wearing politician has a ready soundbite:

My getting elected has caused a lot of reactions from the racists. They weren’t really ready for it, but here I am.

European governments consistently fail to recognize the power of the Islamic bloc vote. Muslims will go to the ballot box if their interests are represented, which increasingly they are and must be as state and religion are inextricably welded together in Islam. Election day even means a day out for the wives, who are encouraged to vote early and often.

At least the Swedish establishment can rest easy after the recent election and allow the frost to settle. After all, it isn’t as though the country is about to be thrust into the European limelight by taking up the reins of the E.U. presidency on Jan. 1, 2023, or anything. Oh, wait…

Even so, is this not precisely what the European Union was set up to provide, mutual assistance between erstwhile nation-states since subsumed into a greater whole for the greater good? If ever a country needed help from the mother ship it is Sweden and it is now, when integrity, security, and probity are needed. Again, it isn’t as if the E.U. has just been devastated by a financial scandal that reaches up to its highest echelons. If, say, the Vice President of the E.U. had been caught in a sting operation involving suitcases of money from Qatar and intended for shady lobbyists, that would be bad for Sweden. Right? Ah, once again, this just in…

Like Sven Svensson on his lifeboat, Sweden is becoming somewhat less boring than its people would prefer, and they are starting to vote that way.