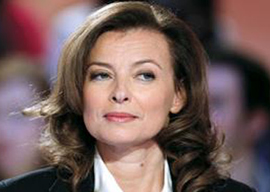 Back in 1840, an Englishman by the name of Alexander Walker wrote a manual by the name of Woman, in which he quoted David Hume and from which I quote:

Among the inferior creatures, nature herself, being the supreme legislator, prescribes all the laws which regulate their marriages, and varies those laws according to the different circumstances of the creature.

So far, so good. Nature is the supreme arbiter, and unnatural acts are a no-no. Hume goes on to say:

But nature, having endowed man with reason, has not so exactly regulated every article of his marriage contract, but has left him to adjust them, by his own prudence, according to his particular circumstances and situation.

“Infidelity is not something society approves of, but it depends which society.”

Which brings me to the core of this piece: the French, their political leaders, and sex. With the publication of a new biography of the French president’s live-in mistress, ValÃ©rie Trierweiler”or Rottweiler, as her enemies dub her”it emerges that President Hollande, while living with the mother of his four children, SÃ©golÃ¨ne Royal, was sharing the Rottweiler with one Patrick Devedjian, a man of Armenian descent and a close friend of ex-president Nicolas Sarkozy. I know, I know, you”re getting confused. I”ll start again. Hollande is living and having children with SÃ©golÃ¨ne, but on the side he’s knocking off the Rottweiler, who is cheating on him with an Armenian. Does that make it any clearer?

Far from suggesting that these people are depraved, it illustrates that sex triangles actually get people elected to the highest office in the land of cheese and surrender.

Ironically, just 20 miles away, in the land of bad teeth and freeloading”Britain”triangulation leads to the loss of office for politicians and rotten publicity in the tabloids for footballers, pop stars, and even royalty. Sex, even to the British, is supposedly life enhancing, but it got Bill Clinton into trouble, although being Clinton, he got away with it. Infidelity is not something society approves of, but it depends which society.

In South Africa, by far the most civilized country in that tortured continent, President Zuma has had many wives and fathered 20 children, some out of wedlock. He’s not even a Muslim, but a Zulu, the bravest of his country’s brave tribes. When Zuma was running for president, no Western newspaper or media dared to touch upon his extracurricular activities because Zuma is black. It would have been racist to suggest it.