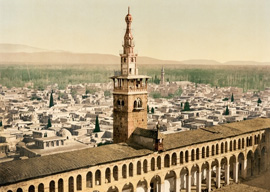 Minaret of the Bride, Damascus

Back in September of 1970 I found myself in the charming ancient city of Damascus. The natives were friendly and helpful, especially as I was suffering from food poisoning thanks to a Lebanese kebab I”d eaten two days previously. My stay in the city was interrupted by the sudden death of Gamal Abdel Nasser, the Egyptian strongman who had been twice defeated by the Israelis yet remained a great hero to the Egyptian public. The Syrians provided a plane for the press corps and flew the lot of us to Cairo for the funeral. When I approached the press attachÃ© in the airport and thanked him for the gesture, I remember the bittersweet smile he gave and his words: “Try and remember that not all of us Syrians are what Israel says we are.”

Forty-two years later, Syria continues to be the whipping boy of the unholy triple alliance of Israel, Saudi Arabia, and Qatar. They say politics makes for strange bedfellows, but it’s not so strange when you think of it. All three are experts in oppression, religious zealotry, and paying zillions to Washington lobbies. Israel has captured Palestinian lands through force of (American) arms and continues to oppress millions of Palestinians under its occupation. The various bombardments of Gaza have killed thousands of innocents, yet the great American comedian Elie Wiesel recently asked Obama, “How is it that Assad is still in power?”

Saudi Arabia, a country whose human-rights record makes Syria look like Switzerland, is the godfather of international terror in exchange for peace at home. The Saudis have funded terror from the start, but because of their powerful DC connections and their ability to bribe everyone involved, Uncle Sam and his poodle the EU are turning a blind eye as Saudi-financed jihadis and al-Qaeda fighters pour into Syria.

The third great democrat/humanist leading the propaganda fight against Syria is Al Thani, the Qatari thief whose family has lorded over the tiny Gulf strip since the early 19th century. Qatar recently bribed FIFA to assign the 2022 World Cup to that crappy little pseudo-country. Al Thani and his gang of thieves have now set their hooded eyes on bigger projects such as establishing a Sunni corridor that isolates Iran and Iraq.

While la Clinton rails against Russia for arming the Syrian regime, she forgets that Uncle Sam arms the Saudis, the Israelis, the Qataris, and now even the Libyans. The Arab Spring is a far more complex event than credulous Western journalists imagine. It is not about the weak rising against the strong. It’s about a transfer of power to rival clans and religious groups. The Saudis want Assad out because he’s a man who, like his father before him, kept Sunni Islamists at bay.