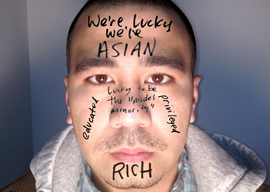 Nobody clutches their purse to their side when an Asian walks into the elevator. If an Asian applies for a job at a bank or on the police force, he or she is welcomed with open arms. When an Asian commits a crime, people are shocked. When an Asian is appointed to the head of the Department of Energy, everyone knowingly nods their head. Asian privilege pervades every part of our day-to-day life and it’s time they joined the conversation about race.

Though they comprise less than 4.8% of the American population, they make up 8.3% of all doctors. Only 2.3% of doctors are African American, yet they”re 13% of the population. Thirty percent of African American men will go to jail, but only 1.6% of prisoners are Asian. Nobody sees the problem with that?

“An Asian can listen to rap music very loudly on a boom box while riding the New York subway without anyone wondering if they”re going to get stabbed.”

McGill University is one of the most elite schools in North America, and to walk through their campus is to be transported into a pastoral Chinatown. This is true of all Ivy League schools. Asian Americans have the highest education level of any racial demographic and they”re also the wealthiest. While African American households earned an average of $30,939 in 2005, Asian Americans walked away with twice that.

The reason for this is simple: PRIVILEGE.

Though many Asians come here with little or no money and live in rough neighborhoods, they are lifted out of this disadvantage within a generation and are soon living an upper-middle-class lifestyle. This is because in America, Asians live a disproportionately advantaged life where things are simply handed to them. Asians turn on the TV and they see George Takei driving a spaceship. When they”re told he’s a fictional character, they jump to real-life astronaut Dr. Eugene Trinh. Asians are overrepresented in science, medicine, law, finance, education, and virtually everything that generates wealth. They are drastically overrepresented in Nobel Prizes. These arrogant Orientals flaunt the racist moniker “model minority.” As a people, these Asians need to recognize they got to where they are not by the virtue of hard work but by stepping on the backs of others. I”m not saying Asians should be paying the rest of us reparations, but a simple “dÃ¹i bÃ¹ qÄ­“ would be nice. (Thanks, Yahoo! co-founder Jerry Yang for the link!) They need to recognize that their position is innately unfair. They need to acknowledge they are lucky. And most importantly, they need to stop it right now.

Asian privilege is, if you will, an “invisible knapsack“ of unearned perks and benefits that an Asian is able to unpack wherever he or she goes”even if they aren”t in Asia. Asian privilege is very, very real and yet nobody’s talking about it. Asians can purchase real estate in virtually every neighborhood they want. Nobody worries about property values when an Asian moves in the neighborhood. When asking for a loan or writing a check, an Asian never has to be concerned with how he or she will be perceived. Asians can say swear words or wear secondhand clothes without anyone assuming it’s due to poverty or illiteracy. When driving a nice vehicle in a bad part of town, an Asian rarely has to worry about being pulled over. Even when he or she does get pulled over, he or she never wonders if it’s because of his or her race. If an Asian gets into a good school, other students don”t assume it’s because of affirmative action. An Asian can listen to rap music very loudly on a boom box while riding the New York subway without anyone wondering if they”re going to get stabbed.