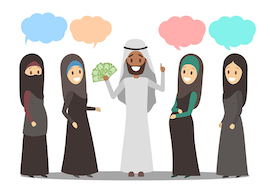 MILWAUKEE—There’s never been a better time to be a polygamist.

All over Africa and the Middle East they’re loosening up the laws so that a man can rack up as many marriages as he can pay for, although I think the strictly Islamic countries are gonna hold you to four women at a time. If you want that fifth one, you have to eeny-meeny-miny-mo the others and pick one to divorce. Sounds a little harsh, I know, but thankfully they make the actual divorce easy. I think all you have to do is go to the town square, scream out “I divorce thee” seven times, roast a pigeon, throw back a Red Bull, and voilà! you’re divorced! You don’t need Gloria Allred. You don’t need Raoul Felder. You don’t even need a Grand Caymans bank account. You might have to give her family a couple of goats, but that’s it.

But that’s not what I mean when I say it’s a good time to be thinking, “I’m gonna go big on wives this year.”

Slowly making their way through the courts are some cases that say it’s unfair and possibly unconstitutional to make polygamy a crime. The legal reasoning harks back to the Supreme Court decision that legalized gay marriage. Since many of the overturned state laws defined marriage as “one man and one woman,” and since the court said the words “man” and “woman” were illegal, people are saying, “Well, yeah, okay, then the word ‘one’ is illegal too.” What right does the state have to say marriage is two people? It could be seventy people, and if you’re Warren Jeffs, it actually is seventy people. Warren is currently serving life-plus-twenty at the Powledge Unit of the Texas Department of Corrections in Palestine, Texas, but if one of these cases gains traction, who knows? He could be back in action as the stud bull of the Fundamentalist Church of Jesus Christ of Latter-Day Saints. Warren would probably be a free man today if he’d just shown a little restraint and followed the example of his father, who left a mere eighty children by a measly twenty wives, and therefore never served a day in jail.

But that’s the whole point of these cases, many of which, by the way, are being brought by the women in the harems. They feel like their civil rights are being violated by cops and prosecutors constantly harassing the man who keeps ’em all pregnant and sheltered. What are they supposed to do if he’s hauled off to San Quentin? Put a group photo on Match-dot-com?

“What right does the state have to say marriage is two people?”

My own view is that would-be wife collectors would be better off following the example of the late Ted V. Mikels, the Las Vegas filmmaker responsible for the immortal Astro-Zombies, the women-in-prison action flick 10 Violent Women, plus forty or so other movies including The Corpse Grinders, Blood Orgy of the She-Devils, and The Doll Squad. (By the way, you guys on the internet who keep crediting Mikels with the 1972 classic Children Shouldn’t Play With Dead Things should be ashamed of yourselves. That was Bob Clark, who would go on to drive-in sainthood with Black Christmas, Porky’s, and A Christmas Story.)

But since it looks like the future is gonna include all kinds of sexual groupings, both legalized and impromptu, I’d like to offer some advice to the strapping young would-be sultans who plan to buy a condo on South Beach and populate it with wives and/or concubines.

Numero Uno: It’s not the sex that kills you, it’s the social media.

A couple of decades ago I was doing TV specials every year from the Super Bowl. So one year I was at the Super Bowl in Miami doing some videos with the great Fred Williamson, better known as The Hammer, who played in the very first Super Bowl but went on to even greater fame as the star and sometime director of such classics as Black Caesar, Hell Up in Harlem, Black Cobra, Three the Hard Way, and dozens of other tough-guy movies.

During the course of our shooting week, the girlfriend of an NFL player “outed” her beau by announcing that he actually had 28 other girlfriends—this may have been an early email hack, but I don’t remember—and the media reaction was to castigate the guy as a womanizer. (Duh.) So I made a few jokes about it and noted that the reason he got caught was that he couldn’t keep up with the phone calls, much less the birthdays—and, let’s face it, he wouldn’t have been able to sustain that much action beyond Feb. 14 anyway without faking his own death and then faking his own resurrection. So in the course of discussing it, Linda Williamson, Fred’s wife of many years, chimes in that Fred had probably easily outdistanced a mere 28-girl Rolodex at the time they met, and Fred responded with one of those million-dollar smiles that told me he would neither confirm nor deny but that, indeed, the logistics can destroy you.

Now transpose that into marriage. You’re not gonna be able to handle the calls, the texting, the “how was your day” thing, even when you get your second wife, much less your fifth one. Sure, you can buy an SUV and take them all to one big Valentine’s Day dinner, but it better cost thousands of dollars because…

Numero Two-o: You should probably calculate $5 million per wife, already banked, before you embark on this lifestyle. Then add a million every time you father a child.

You wanted to be Big Daddy, right? Okay, that’s what Big Daddy does. He pays for the day spa, the Botox, the weekly trip to Bergdorf’s, and the around-the-world cruise with the stars of Arrested Development (because Wife No. 3 just loves Arrested Development). The footwear bill alone is gonna stretch toward seven figures annually.

Numero Three-o: If you do what most of these guys do, and keep bringing in younger and younger wife material, the management of the original wife and her immediate successors becomes exceedingly complex.

As strife develops among the wives, you will be presented with arguments so byzantine that they would vex a senior judge at the Hague. You will become a household lawmaker, police chief, and enforcer of meal times. This will be unending. This will require answering email at 4 a.m. Bedrooms will need to be reassigned. Entire wings will be constructed for internal political reasons. This will become a full-time job in addition to the full-time real job that keeps your house of cards from collapsing.

But the main reason you probably wanna pass on the opportunity to run a seraglio is all about vanity.

Numero Five-o: Whether you want to be or not, you will become the star of a reality show.

On this reality show, your life will be dissected like a bullfrog in tenth-grade biology class. And eventually someone on one of these shows will say the equivalent of “You know what the surprising thing is? He’s not that good in bed!”

You have orchestrated your own castration. Since everyone watching from the outside wants to believe you’re “not that good in bed,” a cascade of rumors will pursue you. You are an impotent satyr, a ghost of a man, who uses his money to hide his inadequacy. You will be lampooned as a shallow buffoon. Your life is over. All you can do at that point is run for president.