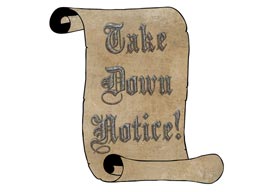 I came up with a great way to beat the Democrats at their own game. I decided to start a petition to change the name of the Robert C. Byrd Courthouse in Beckley, West Virginia. It’s on TakeByrdDown.com and we started it on Wednesday. Then that prick Andrew Wilkow stole the idea, got in a time machine, and started a petition to remove Byrd’s name from everything. I don”t get Wilkow. He could have used lottery numbers to become a billionaire and had way more influence than stealing some silly idea. I mean, he’s already made it clear he’s capable of a criminal act”but I guess he”d rather mess with my life than improve his own. Time travelers are dicks.

The other possibility is we both noticed the hypocrisy that comes from the left and had this idea independently. It’s hard not to notice. When someone is literally wearing a Klan uniform and calling you a racist, you can”t help but point out the glass house his rocks are coming from. When they tell you America is steeped in a history of racism, you can”t help but check the tag on the racists they”re talking about. It said “Democrat: Do not remove under penalty of law,” but someone tore it off.

I realize a lot of the old codgers reading this are going, “What’s the matter with racism?” Humor me for a moment and just pretend it’s red hair. They claim gingers are evil and the cause of the world’s suffering, yet virtually all of them have carrot tops and always have. If you don”t object to their prejudice can we at least have a brief laugh at their hypocrisy?

“I don”t mind racists per se. I mind people shitting in my mouth and telling me it’s a sundae.”

Jonah Goldberg’s Liberal Fascism eloquently documents the “secret history of the American left from Mussolini to the politics of change.” Thomas Jefferson wanted to free all the slaves but the 200 he owned. Andrew Jackson saw America as a “country for white men.” The KKK was all Democrats. The segregationists were Democrats. The Civil War was Democrats vs. Republicans, and Lincoln was a Republican. FDR put Japanese Americans in internment camps. He appointed many racists to the Senate and made KKK member Hugo Black a Supreme Court judge. President Truman said, “I think one man is just as good as another so long as he’s not a nigger or a Chinaman.” They were all Democrats.

When confronted with this dark past, liberals roll their eyes and switch the drinks so now you have the poisonous cup. They claim that everything changed after MLK and the Democrats became egalitarians while the Republicans embraced racism. Then they go back in time and Photoshop pictures of socialists with the words “Republicans on Parade.”

The problem with this sad attempt to weasel out of history is there was no switch. As late as 1938, FDR was giving the antiblack movement a huge boost by bulldozing Harlem. In one fell swoop he taught an entire generation of black Americans that they can”t build a community on their own, they must do it through the government. Look at LBJ, who died in 1973. He famously quipped, “I”ll have those niggers voting Democrat for the next 200 years.” This persists today where three-quarters of blacks are born to single-parent households incentivized by welfare. Where’s the switch? It appears to me their agenda has been pretty fluid from Jefferson to now. The founder of Planned Parenthood said, “We do not want word to go out that we want to exterminate the Negro population” in 1939. In 2011, 146,856 black babies were aborted. The left mocks conservatives and says things like “Aren”t you supposed to be the party of Jesus? Where’s your compassion?” Welfare doesn”t empower blacks. It enslaves them. When you fake test scores and push a black kid into a college that’s out of his league, he doesn”t thrive. He drops out. These kids rarely go back down to a college at their level”the one they may have gone to were it not for positive discrimination”they drop out entirely. You just deprived a kid of an education in the name of helping him. What’s more racist than that? The right absolve themselves of the bigotry of low expectations by embracing meritocracy. They treat everyone as equals who deserve the same rights”no more and no less”than themselves.

Right now, Obama is trying to force poor blacks into upper-class areas like Connecticut. These areas are already relatively diverse. The blacks who live there earned the privilege with hard work, and they are appreciated as neighbors for that very reason. They don”t want the ghetto moving in next door any more than the white, Asian, and Indian residents do. Not only is the left terrorizing black families in the name of equality, they”re being really smug about it. That’s the part that pisses me off. I don”t mind racists per se. I mind people shitting in my mouth and telling me it’s a sundae.