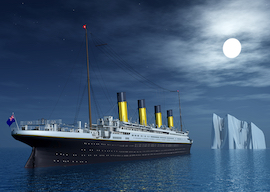 As Emperor Maximilian told his convulsed-by-tears servants while he was about to be executed by the Mexicans, “Who knew?” Last week the owner of the Palace hotel in Gstaad rang me and asked me to join him for a drink with Akira Kitade, a well-known Japanese author, best known for Visas of Life and the Epic Journey, concerning the Jewish Sugihara survivors reaching Japan and safety. Like most of his countrymen and -women, Mr. Kitade was extremely polite, and shyly asked me to tell him all I knew about Nissim Segaloff, born in Bulgaria in 1896 and a survivor of the Titanic disaster in 1912, as written by yours truly in the Jan. 27, 1979, issue of The Spectator.

As the 1979 Spectator issue was produced, I felt slightly weak at the knees, but we were sitting down and I was having a stiff drink. “Did you come over from Japan for this?” I asked weakly. “Yes, very important I speak with you face-to-face,” answered Akira, and never in my long life have I wanted more for a sudden earthquake to swallow me up. Here’s High Life, “Ski Swiss,” Taki:

The Ayatollah of backgammon, Nicholas Sargeant, born Nissim Segaloff before the turn of the century, was the first backgammon hustler, having clipped a certain Mr. Guggenheim on a ship called Titanic. Alas, Guggenheim went down but Nicky survived. He’s now hustling in the Palace in Gstaad and adding class to the place.

“That’s it, I swear, and may the fleas of a thousand camels infest my armpits if I’m lying.”

How was I to know forty years ago that a Japanese writer would research the subject of the untold story of Japanese civilians who transported Jewish refugees to safety, and dig up something I had obviously made up as a joke? Nissim, or Nicky, was a buddy of mine, but he lacked charisma and looked too eager (hungry for money) to be taken seriously, so I decided to give him some class as a man who had survived the sinking. But suddenly it looked awful. A hardworking Japanese (they are my favorite people—polite, clean, tough, and traditional—and they are this way because no foreign cultures are allowed within Japan) had come all this way because of a joke of mine. I offered to commit seppuku, but Akira said no way. So I confessed to him that I had done this only four times in my 42 years of writing the column. “Please tell,” said Akira:

The Titanic had also featured when I wrote that my friend Eric Nielsen, long dead, had survived by dressing up as a little girl and shouting, “Mama, mama” until an old salt grabbed him and put him on one of the lifeboats. Nielsen was 25 years old at the time and living with a man called Bobby Lester, also long gone. That makes two. The third time was when I announced that Madame Saddam Hussein was living at the Gstaad Palace during the first Gulf War, and tens of journalists arrived looking under every hijab in the place for the dictator’s better half. Finally, after 9/11 I wrote in the pages of The Spectator about how Osama bin Laden had gone to school at the Rosey in Gstaad; kept the Kandahar suite at the Palace year-round; was on the school ski team with my son, Jean-Claude Killy, and Gianni Agnelli; and was called Harry Laden at his St. James’s club. Graydon Carter of Vanity Fair dispatched two hacks at great expense to find him and was furious they didn’t manage to.

That’s it, I swear, and may the fleas of a thousand camels infest my armpits if I’m lying. Poor Akira forgave me and went on to Geneva to continue his search. I went off to London for Maya Schoenburg’s Requiem Mass at the London Oratory, probably the most magnificent goodbye to a dear friend I’ve ever experienced. As Father Julian said in his address, the difference this time was that it was a Mass, and not a memorial service with friends speaking about the departed. This was the real thing, and it made me love the Catholic Church and service more than ever because it was in Latin, the way it should be. The Christian religion is under attack nowadays by New Age bullshit, and has been replaced by the horrible ignoramuses who lead the culture with drugs, porn, and violence. The next big thing is going to be a declaration by The New York Times that God is transgender. Like the vandals of the past, these modern barbarians drool at the prospect of a diminished Catholic Church. They should have been at the Oratory last week. The hymns and the music were awe-inspiring, worthy of all the great and wonderful things the Church has accomplished these past thousand years.

Afterward, the great and the good—the place was packed—had drinks at the church, and I had lunch with my friends Count and Countess Bismarck. And played my last joke ever. Leopold Bismarck was not allowed by an usher to enter a reception room where Hillary and Chelsea Clinton and other biggies were assembled. I told him the reason for this was that he lacked a B on his lapel. B stands for “billionaire,” and the packed room was reserved only for them. Bolle smiled and didn’t seem to mind at all. (He’s quite secure in his skin.) The reason, of course, was too many people. It was, I swear, my last joke ever. Or may the fleas of a… I’m off to the Bagel.