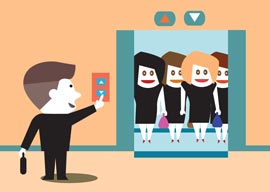 Here is my Christmas gift to Takimag readers, one that applies mostly to unmarried males, but it’s also available to married ones who might wish to test whether that old magic still works. (Female readers of the best magazine in the whole wide world may also pick up a few hints.)

This is not to be confused with the amateurish, vulgar, and embarrassing inventory of the Swiss-American Julien Blanc on how to pick up women. His guide was meant for tattooed beer drinkers trying to pull drunken tarts in cheap bars. Mine is for gentlemen endeavoring to make an impression on ladies and well brought up young women. Here we go:

Needless to say, the way to success with the fairer sex cannot be taught. One either has it or one doesn’t. Politeness comes first, that and humor. Make a girl laugh and you’re halfway there. Never harass, never beg, never insist too much. (Choking as foreplay is a real no-no.) Wit and self-deprecation are indispensable. Ever since I began to look my age, I’ve become more polite than usual, and when the opportunity arises, I approach the lady or ladies in question and ask, smilingly, if any of them are at all interested in a much older man. Women are much nicer than men, and in all the years I’ve been trying this, all but one have always laughingly said yes.

“Make a girl laugh and you’re halfway there. Never harass, never beg, never insist too much. (Choking as foreplay is a real no-no.)”

I never thought it would work in Greece, but the last time I was there two months ago, I approached a table of five girls who were looking awfully jolly and in their cups, and when I asked them this particular question they roared with laughter. Because of a slight accent when I speak Greek, one of them mistook me for an American, and said in a low voice, “the oldie is cute.”

As previously mentioned, this is how you pick up strangers of the opposite sex in polite society. In places like Hollywood, nothing I’ve said counts. La-la land requires its very own key questions that are a sine qua non. “What are you missing in your life?” is Hollywood pickup 101. The most important of all is “What can I do to make your life better?” As the famous film director James Toback said to me, “Anyone not responding to that is not worth picking up.” Being direct in California helps as much as it hinders at 5 Hertfort Street.

Anything that doesn’t feel like a pickup line is a very good line. A hint of potential authenticity is a plus, and can sway the lady after a drink or two. As is the enticement by disappearance. Having come on strong on the romantic side, a very polite goodnight accompanied with the wish to see her again is very good. Women are curious and easily intrigued, and what better way to intrigue them than to leave them alone to think of you?

Another sine qua non is to never, but never, ask about her boyfriend, husband, or lover. Pretend that she’s never had any of the three. Never give her time to think of him; women, unlike us, have a conscience. This is very important. And don’t talk about yourself. Ask her about herself instead. Her job, her dreams, her likes or dislikes. Always with jokes thrown in for good measure and with plenty of smiles.

Poetry and elegance might seem a bit decadent nowadays, but lyricism with a touch of madness or even perversity intrigues the weaker sex. You may sound direct, à la Hemingway; redolent of Oscar’s withering hauteur; or even passionate like Verlaine—if she’s any good she’ll love it. But always end up with a joke, telling her you had rehearsed it once you spotted her at the start of the evening. Honesty rarely fails to impress. Never forget that seduction is an art, and the drunken gropings of many of today’s seedy Lotharios put the stronger sex to shame.