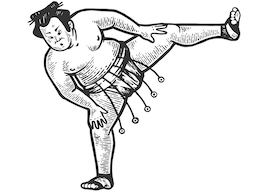 GSTAAD—I was reading Julie Burchill’s review of my friend Candace Bushnell’s Is There Still Sex in the City? when one of the reviewer’s insights struck me like a stiff left jab to the noggin: “Those who have persisted in carrying on creakily have become increasingly embarrassing.” Ouch! Could she have the poor little Greek boy in mind? Of course not, I told myself, but then…never mind. A little paranoia at my age is normal.

I felt better the next day when a Dutch TV crew of five arrived in the Alps to film a program called How to Be a Man. It stars one man—me—and it will be shown on Dutch national television in November. Yippee! Margriet van der Linden, a statuesque, Viking-like tall blonde, and a real pro, put me through the wringer. Rarely have I been asked so many intelligent questions, challenging at times but never intrusive or embarrassing. We spent three days talking about manhood in the age of #MeToo, and filming when I mixed it up in karate training with my sensei Richard Amos.

More about karate later, but how to be a man nowadays is quite tricky. If one reads the lachrymose prose of, say, Roger Cohen in The New York Times, what passes as a man of good sense and taste means someone without courage or originality. (Actually, it’s worse—reading Cohen reminds me of a queasy teenager squeezing his pimples. La Goldberg is even worse.) A sense of duty never to leave a wife, but also a sense of entitlement never to give up a mistress, just about defines manhood as far as I’m concerned. The Dutch lady was very good in the manner in which she took me around my life; it was obvious she had read the Spectator columns with evangelical zeal, because she knew all about me. She wished to know what has happened to men, and my answer was #MeToo. Some of these brainless female American hustlers are even challenging men’s literary achievements. A female clown critic recently wrote that Zelda Fitzgerald’s madness was due to the fact that her husband, Scott, cribbed from her. Imagine the great Scott, author of The Great Gatsby and Tender Is the Night and numerous other heartrending novels, cribbing from the poor, tragic, mad-as-a-hatter Zelda (mind you, a good occasional writer herself, but not anywhere near him). Such are the joys of the American-made #MeToo bullshit.

“Rarely have I been asked so many intelligent questions, challenging at times but never intrusive or embarrassing.”

We spoke a lot about sport. Part of the experience of sport resides in dealing with the finality of it. It’s often a kind of death. This is not true of seminars, lectures, or even reading. (You can always read it again.) Pursuing excellence plus the requirements of courage and personal discipline make sport unique, although most sports are now entertainment, the ethos of sport long gone. The money will do it every time.

The TV crew then came to the dojo, where my sensei and I gave them a bit of a show, kicking and punching each other. Richard Amos is as brainy as any karate teacher around and is as tough on the floor as they come. His timing and focus are such that it’s almost impossible to land a solid hit. Margriet was impressed, I could tell, and she asked him some rather brainy questions. After that brief exhibition it was back to hard work, and it made my week. Get up early each morning, drive to the dojo, warm up, and have a go. With 55 years of training experience, I cannot accept that this stage of my karate life will no longer be filled with new possibilities. Getting stronger and faster, kicking higher, those were the old goals. Now I seek to move with less effort and look better aesthetically. The irony of this is that the more one loses one’s self in the inner, unseen workings, the better the technique becomes on the surface.

So, how to be a man? Well, Maxine Blythin—the transgender whose batting average is 105 in female cricket—can tell us a thing or two. As can brainless TV pundits who tell us gender is fluid and not determined at birth. I think a man needn’t be dominant, nor does he need to burst into cringe-inducing tears while looking at reruns of the Harry-Meghan wedding. The discussion with the Dutch lady over tournament money in tennis was spirited. If you want equal pay you compete equally, said yours truly: best of five sets, men and women in the same draw. That’s equality, as in equestrian events. Ditto for athletics. The Dutch did not take sides on that one. Nor on anything else—they just put out their nets and I swam into them.

The mother of my children thinks that the nice Dutch crew will do a hatchet job to top all hatchet jobs on me. I actually don’t give a damn. I said what I believe, and in this age of prime-time hatemongers posing as utopians, the worse I come off, the better I’ll feel. These hatemongers are out to do away with our past, calling it a mythology while spreading misinformation and lies about it. We’ve had a glorious past, and men have played the greater part in it because that is how God meant it to be. Today’s clowns are against nature, and they will not, cannot win. Real women will not allow it. #MeToo should join the circus or go and reproduce itself.