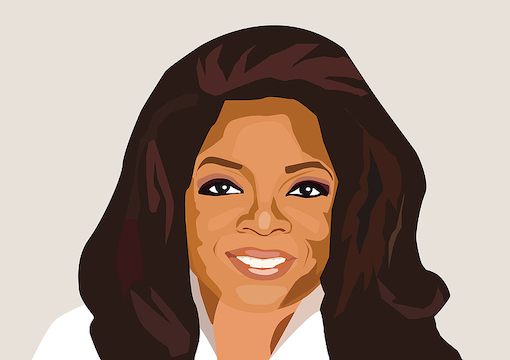 GSTAAD—Some of you may have noticed I have not commented at all about the running soap opera and latest brouhaha concerning the Halfwit and Meghan Macbeth. That’s because I decided long ago the best way to counter their publicity machine is to never mention them. But I’ve also done something most of the hacks writing about the couple have not: I’ve been a guest on Oprah’s show twice, once by my little old self for a whole one hour. Although wince-inducing, squirming, cringeworthy, and gushing, the Oprah show is always designed with a theme to it, but more important, with a hook. The hook is what will make peoples’ ears prick up, what will keep the tale relevant, for example, racism in the Palace, and in this case, what made the hook kosher was the baby Archie story. “Black or white, the royals demanded to know, and that’s what we’re gonna hang the whole thing on,” I can hear Oprah telling the two geniuses.

Make no mistake about it, that show was rehearsed, main points agreed upon, and then reviewed for any “gotcha” details that may have escaped the trio and a battalion of extras. Everything on American television is a lie: canned laughter, fake spontaneity, false news, misleading advertisements. So why not rehearsed interviews? They sell millions of dollars of teeth whiteners that don’t work, hair-growing lotions that don’t grow hair, youthful-skin products that don’t stop wrinkles—why not sell a bit of racism among the Windsors?

Although I’m told she acted sycophantically toward the couple, Oprah is a mini-tyrant on and off the set. If some unknown addresses her without Sammy Glick-like subservience, she acts as if a lowly Nubian slave had somehow approached Queen Nefertiti and asked her for a date after a swim in the Nile. She also knows how to turn on the charm and is a self-made-billionaire black American female, no small achievement. Here’s how we got together.

“Oprah is a self-made lady who realized earlier than most that self-centeredness had become the most cherished value in American minds.”

It was 1982 and I had written an anti-American-feminist article for TAS that appeared under the heading “American Women Are Lousy Lovers.” It certainly caught the eye of many people, except I had written nothing about the sex act, just the American habit of high-pitched screeching, not to mention the granite looks, large teeth, aggressive posturing, and lack of femininity. The Phil Donahue show paid for a first-class ticket from Athens to Chicago, all expenses paid with a return to the birthplace of selective democracy, for one hour, thirty minutes of my time. Although training for the European karate championships at the time, I accepted. It was late September. The Donahue show went well because I turned the audience against him and pro-me when I defended my case of keeping mistresses but never divorcing my loyal wife. “Unlike you, Phil, we Europeans do not change wives for a new model, like a car, every year. We put them on a pedestal, worship them, and have our fun on the side. Didn’t you get rid of the mother of your four children last year for a new model?” “You son of a bitch,” exploded Donahue, but the mostly aged female audience began cheering for me.

After the show Oprah was on the telephone. It was a natural. Before going on the air she asked what I thought of black women. I told her. “The audience will be very interested in what you think of black women,” she said. (That was the hook.) That audience was 50 percent African-American. This was Chicago, after all. On the air I told her I liked black women because they were whores in bed, ladies in the drawing room, and great cooks in the kitchen (the old German cliché). She went wild. I was her hero in 1982. Five years later, not so much.

This time, she flew a friend and me to Chicago from New York. The theme was older men who date younger women. My buddy, a Vietnam veteran who was highly decorated, was not too shifty upstairs. “Why go out with an old bag when…” The women in the audience began hissing. A diplomatic Taki saved the day by announcing that mature women would never date bums like us, whereas innocent youngsters might. Oprah was not best pleased, but the ladies were. The hook had not worked. The next invitation to appear on Oprah will be during the next life.

I believe it was Abe Lincoln who predicted that America would become a great superpower whose demise would come by suicide. Like a venereal disease uncontrollably spreading, wokeness will cause the final collapse of the republic. Major publications owned by white billionaires are digging America’s grave, spreading the poison that white is evil and has to be eradicated along with white history, white art, white literature, and white movies. Oprah is a self-made lady who realized earlier than most that self-centeredness had become the most cherished value in American minds. Nothing else mattered but me, me, me, me. As long as thirty years ago, the “Oprahization” of America was discussed in these here pages. H and MM were naturals for her. A dysfunctional family is to Oprah what a French fortified town is to a Panzer commander: meat for the taking. Narcissism is to TV what Paganini was to the violin. Meghan will one day replace Oprah as America’s auntie, will make billions, and will permit Harry to graze peacefully at a California farm. You read it here first.