Talking Down to the Blacks 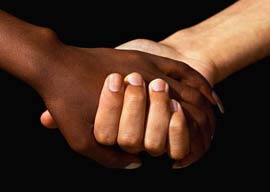 A new study from Yale and Princeton shows that only white liberals are dumb enough to think they can appease black people by acting dumb around them.

The study is called “Self-Presentation in Interracial Settings: The Competence Downshift by White Liberals” and was authored by Cydney H. Dupree of Yale and Susan T. Fiske of Princeton. Dupree is a black woman, and what should have tipped you off to that is the fact that no white woman would ever spell “Sydney” that way.

In a summary article she wrote for Yale titled “White Liberals Present Themselves as Less Competent in Interactions with African-Americans,” Dupree synopsized her study thusly:

A new study suggests that white Americans who hold liberal socio-political views use language that makes them appear less competent in an effort to get along with racial minorities.

In the first of five studies, the team examined 75 campaign speeches by presidential nominees for both major parties since 1992. Hillary Clinton was removed from the running because of her gender; Barack Obama was excluded because of his race; and most hilariously, Donald Trump was disqualified because he never made a point of delivering speeches to predominantly minority audiences.

“Only white liberals are dumb enough to think they can appease black people by acting dumb around them.”

Dupree and Fiske then examined the difference between the candidates’ speeches to white audiences and minority audiences. In this and all subsequent studies, they examined the speaker’s language for terminology that either signified “warmth” (e.g., “supportive” or “compassionate”) or “competence” (words that signaled ability or status such as “assertive” or “competitive.”) According to the authors:

Presidential candidates who stand for the liberal political party expressed significantly less competence—using fewer words related to power and agency—to minority audiences than to White audiences….Whites who may be more affiliative toward Blacks alter their verbal responses toward them in a way that matches negative stereotypes [about low black intelligence].

In other words, Democratic candidates talked down to minority audiences—and not to white audiences—while Republican candidates didn’t change their tone for either audience. The study’s authors refer to this abrupt switch toward simpler and more emotional terminology on the part of guilt-stricken white liberals as “competence downshift.”

The results skewed the same way in the remaining studies, which examined how self-professed liberals and conservatives behaved depending on whether they were writing a book report to be read by someone named “Emily” or “Lakisha”—self-professed liberals typed very slowly and used small words when addressing Lakisha, whereas there was little to no discernible difference in how conservatives addressed both Lakisha and Emily.

White liberals may indirectly express a patronizing form of bias in their responses to outgroup members by drawing on negative status/competence stereotypes about Blacks. That is, with the best of intentions—seeking to affiliate with a Black interaction partner—White liberals may unwittingly draw on negative stereotypes, dumbing themselves down in a likely well-meaning, “folksy,” but ultimately patronizing, attempt to connect with the outgroup.

Remember when Hillary Clinton was ululating before a black crowd and tried to sound like a black male preacher? It was patronizing, faux-folksy, and nauseating. It was almost as cringeworthy as all those times when Barack Obama tried to sound black.

Whether you want to refer to this odd behavioral phenomenon as “the soft bigotry of low expectations” or “unconscious white supremacy” or simply “white liberals going out of their way once more to prove they know absolutely nothing about black people,” Dupree and Fiske’s results are both informative and comical.

For decades now I’ve made it explicitly clear that the racial group I hate far more than any others is white liberals, yet this is a group so drunk on the idea of their own moral irreproachability that they don’t seem capable of grasping that anyone could sincerely dislike them much less hate them, so they insist that my loudly articulated loathing for them is in some way a dishonest deflection tactic from what they insist is a hatred for blacks or others.

This, naturally, leads me to hate them even more.

My hatred is amplified when I ponder that the stereotypical white liberal is someone who fetishizes the black experience, but always from afar—almost without exception, they live in an all-white enclave and either survive on an inheritance or tinker away in white-collar jobs where they rarely encounter blacks, much less the ill-tempered ghetto type they see on TV and think are really, really cool.

I get along better with blacks than I do with white liberals for several reasons. The first is that, unlike the roaring majority of those pipsqueak whites, I’ve experienced more than my fair share of hard knocks and material deprivation. The second is that, because of such hard knocks, most blacks tend to be more realistic and less whiny than white liberals. The third is that, like most people who come from the working class and live in the South, you sort of need to get along with blacks because it’s impossible to get away from them.

So did Lerone Bennett, Jr., former editor of EBONY magazine:

The white liberal is seeking personal salvation, not justice….What moves him is guilt. What the liberal seeks is his lost innocence. What the liberal wants, paradoxically, is for the Negro to tell him that he is not as white and as cold as snow.

That’s the sort of racial harmony I can get behind—the kind that excludes white liberals.