Talking About Illegals With Our Politicians 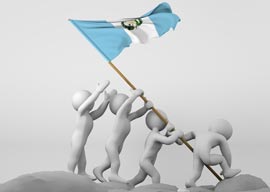 Most Republican politicians don”t know this world, but their voters increasingly do and so they have to pretend to care. In 2002 Scott Walker invited illegals in a La Raza-endorsed document as Milwaukee county executive. Predictably they came”85,000 and counting“and killed a lot of Wisconsinites. An illegal immigrant in Scott Walker’s Milwaukee County was given just 11 months in jail with work-release privileges after he drunkenly crashed while driving the wrong direction on the freeway. Now Walker’s pretending to be against amnesty at the same time he tells donors he’s not going to go “nativist.” Walker told an illegal immigrant heckling him on the campaign trail to “follow the law,” but the illegal already is, thanks to Walker’s”and Jeb Bush’s and Rick Perry’s”sanctuary-city policies. In 2013 Walker backed a path to citizenship for those here illegally. Walker even called for a Mexican consulate in Wisconsin“the 51st in the U.S.

Republican politicians squirm when asked about the illegals already here. Sen. Ted Cruz, who, other than Donald Trump, is the least worst on immigration, had trouble answering what he would do in an interview with Chuck Todd. But there’s a simple way to get them all to go home: Tax the money they send back to the home country. One in nine Guatemalans are in the U.S., and they sent $4 billion back in 2010. Remittances are big money for most of Central America. I once asked the former president of El Salvador what would happen if the U.S. cut off or taxed remittances: “We would collapse.” The illegals borrowing $5,000 in high-interest debt to finance their smuggling on a $1,500 income would think twice if we taxed their ill-gotten gains. Some might even self-deport or, better yet, refuse to come in the first place. Indeed, without the $20 billion a year Mexicans in America send home, Mexico would be even more messed up.

Other countries already tax their foreigners. Why can”t we? We could even use that taxed remittance money to pay off some of the costs we incur from illegal aliens”and build that danged fence.