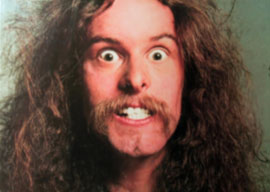 His pinko antagonists were screeching like freshly castrated mink at an overcrowded fur farm last week regarding comments the wild-eyed and possibly insane rocker/hunter/gun fetishist had made at a National Rifle Association convention in St. Louis, specifically this Nugent nugget:

If Barack Obama becomes the president in November again, I will either be dead or in jail by this time next year.

That sort of sounds like a threat”until you pay attention for five seconds and realize the person who’s winding up dead or in jail in that scenario is Ted Nugent, not Barack Obama. Rather than making an open threat to the government, it seems as if Nugent was expressing fear of being threatened by the government.

But, lest ye forget, this is the real world, where people believe what they want to believe. A Daily Kos blogger who doesn’t think “Neon Vincent” is an idiotic pseudonym”or whose parents, the Vincents, didn’t think it was idiotic to name their child “Neon””accused Nugent of “stochastic terrorism””a new imaginary term apparently first imagined around the time of the Gabrielle Giffords shooting when the left was popping hemorrhoidal veins trying to imagine that right-wing rhetoricians are able to send out coded or subliminal or low-frequency messages that somehow cause psychotic lone wolves to shoot bubbly and kindhearted Democrats. A CNN writer who has dreadlocks and once received some sort of gay-journalist trophy said that Nugent should be in jail for his comments.

“I find it refreshing that he’s at least making an attempt to be macho.”

These are the same sort of people who for eight years walked around with picket signs featuring Bush’s bloody head impaled on a stake, so it’s heartwarming to see that they’re suddenly concerned with the sanctity of the presidential office and our sacred mission to vigilantly protect the Commander in Chief. For some reason, thug rappers rhapsodizing about using firearms to blow off civilians’ heads or threatening presidents’ lives don’t seem to alarm the progs nearly as much as Ted Nugent’s gun obsessions do.

A lonesome blogger who isn’t ashamed nor afraid to announce he’s part of some group of Dungeons & Dragons fanatics who plan to vote for Obama called Nugent a “Domestic Terrorist, Chicken Hawk, Coward, [and] Child Rapist.”

Those are some serious charges. The Secret Service appears to disagree with the “Domestic Terrorist” thing, or they probably would have arrested Nugent after grilling him about his “dead or in jail” comments last Thursday.

“Chicken Hawk” and “Coward” both likely refer to the fact that although Nugent is always blasting off high-powered firearms, guzzling ox blood straight from recently slaughtered oxen’s throats, and saying we should pull a “Nagasaki” on the Arabs, he received a military deferment in the late 1960s and thus avoided serving in Vietnam. In 1977 Nugent told a High Times reporter that he’d purposely avoided bathing for a month before his Army examination and defecated in his pants for a solid week preceding his meeting with military examiners. He later said he fabricated the whole story to prank the High Times reporter, possibly because Nugent has always been stridently anti-drugs. He also said he was lying the time he told a reporter he once stuck his erect penis through a map of West Virginia. Either way, he received a military deferment, but the official documents are inconclusive as to the specific reason.

The “Child Rapist” charge is perhaps the ickiest, especially since Nugent admitted to bagging numerous underage groupies back in the 1970s. The Nuge even took the Creep Factor up a notch when he persuaded a 17-year-old girl’s parents to allow him to become her legal guardian, in effect slaloming around pedophilia charges by becoming the girl’s ersatz father while presumably having sex with her. Courtney Love also claims she gave Nugent a blowjob when she was twelve, but I suspect that Courtney Love was born lying and giving people blowjobs”often simultaneously”so I’m not sure how to deal with that claim.

Nugent also appears to be a gullible Republican tool, gleefully supporting all the neocon-industrial complex’s post-9/11 military escapades. He also tends to unquestionably support every carcass of a presidential candidate the GOP spits up every four years. And he’s been known to chum it up with neuron-deprived mushroom-brains such as Rick Perry and Sarah Palin.

Now that I’ve gotten the bad things out of the way, there’s a lot that I find to be absolutely lovable about Ted Nugent.

He has a sort of Jack Nicholson-with-rabies charisma, and even reporters who hate what he represents say they find it almost impossible to dislike him after meeting him. He’s also one of the most quotable musicians of all time, bestowing upon the world verbal gems such as “The whole world sucks, but America still sucks less,” “If you don’t have a sense of humor, you’ll hurt yourself getting angry at me,” and “Mitt Romney has already denounced my guitar playing because it’s too sexy.”