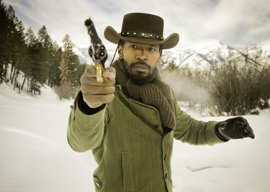 Quentin Tarantino’s Django Unchained is, among much else during its leisurely 165-minute running time, an adolescent male revenge fantasy about an omnipotent mass shooter wreaking carnage upon dozens of victims. I suspect the film would have appealed profoundly to the late Adam Lanza.

You might think that this wouldn”t be the best time for a quasi-comic daydream/bloodbath about a deadeye gunman who always fires first and is immune to the thousands of bullets shot at him. But the recent unpleasantness in Sandy Hook has gone almost unmentioned in the critical hosannas greeting Django…because, you see, the invulnerable hero is a black gunman shooting bad (i.e., Southern white) people.

It’s not much more complicated than that.

For example, in the The New York Times, the scholarly and mild-mannered A. O. Scott declares Django:

…a troubling and important movie about slavery and racism.

“What matters is white-on-white moral status striving. And in that eternal war, even Quentin Tarantino is a welcome recruit.”

According to Tarantino lore, the former video-store clerk is a dyslexic with a 160 IQ. It’s hard not to be amused by how easily this semi-literate junior high school-dropout dupes 21st-century intellectuals.

The reason Tarantino has had the time to watch so many bad movies is because he doesn”t like the written word. Most people of Tarantino’s intelligence discover that reading is a higher bandwidth way of finding out about the world than watching straight-to-video dreck. But the auteur‘s learning disability has left him defensively proud that he’s ill informed about everything other than movies.

For example, Django begins with the title card “1858,” followed by the helpful explanation “Two years before the Civil War.” Presumably, one of Tarantino’s yes-men eventually got around to apprising him that the Civil War started in 1861, not 1860. But Tarantino is a geek, not a nerd, so he’s not going to change his screenplay just because some Poindexter looked something up on Wikipedia. If the year the Civil War began wasn”t mentioned in Mandingo, Quentin doesn”t want to know about it.

Similarly, slavery is a potentially fascinating topic, but to have something interesting to say about it would require Tarantino to read a book. And that was never going to happen.

Tarantino may not know how to spell, but he knows how you are supposed to think: solely in terms of Who? Whom? The only thing that matters anymore is whose side you are on.

As you may have noticed, Tarantino isn”t black, Jewish, or female. Nor has he shown much genuine interest in those designated victim groups. Instead, Tarantino’s favorites have always been middle-aged movie tough guys.