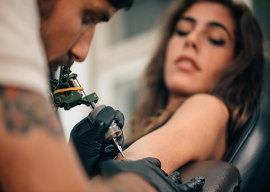 Ariana Grande, of whom I had not heard until Salman Abedi killed 22 people at her “concert” in Manchester, has had herself tattooed with a picture of a bee, a symbol of Manchester’s industrious industrial past, as a “permanent tribute” to the city. Apparently, the other performers in her vulgar act have done likewise. Could courage, compassion, sympathy, self-sacrifice, indeed virtue itself, go further?

This could be the start of something big: a movement called Tattoos Against Terrorism, or TAT for short. If anything could convince the Islamic suicide bombers of the superiority of the Western way of life, with its fundamental freedoms, surely this could. Alternatively, it will terrify them into giving up.

However, one has to be slightly skeptical of the permanence of this beautiful permanent tribute. The bee, after all, was also the symbol of Napoleon, among other historical figures to have adopted it, and rather more famously than Manchester. When, in The Tempest, Ariel sings:

Where the bee sucks, there suck I:

In a cowslip’s bell I lie;

There I couch when owls do cry.

On the bat’s back I do fly

Merrily, merrily shall I live now

Under the blossom that hangs on the bough.

I challenge anyone to think of Manchester. This would take cognitive dissonance to a new and higher plane.

In a short time, therefore, the tattooed bee will no more conjure up Manchester than a tattooed palm tree would conjure up Antarctica. It will be just another instance, though a minor one, of the inexplicable epidemic of self-abuse that has overtaken the Western world in the past two or three decades. And when Ariana and her sidekicks tire of their compassion, sympathy, etc., they can always have the tattoo removed, for the techniques of removal have improved in tandem with those of putting them on: an example, no doubt, of what the economist Joseph Schumpeter called capitalism’s creative destruction, though tattooing itself is more like an instance of its destructive creation.

But there is such a thing as progress. In the old days, tattoo removal was a crude and disfiguring process. It was slow, painful, and not altogether successful. It was offered as a service to prisoners because it was not easy to find employment with Fuck off tattooed on one’s neck, and unemployment was thought to be conducive to, if not actually causative of, recidivism. I am not sure if anyone ever did a cost-benefit analysis of tattoo removal in prison.

Besides, the technique was not suitable to the acres of human skin now routinely disfigured as a means of individual self-expression, and those who had inscribed on themselves the name of their beloved, usually on a scroll wrapped around a heart, had to content themselves with a tattooed erasure of that name when it no longer corresponded to that of the current beloved, usually by blue lines. The names of children, by contrast, even when no longer seen or visited, let alone supported financially, were not crossed off or inked out. That would have been cruelty toward them in the same way that having their names tattooed in the first place was undying love for them. One didn”t just wear one’s heart on one’s sleeve; one’s sleeve was one’s heart.

When it comes to erasing from their skin names from the past, however, the tattooed are as nothing compared with some owners of secondhand books. They score through the names of previous owners inscribed on fly-leaves with something approaching vengeance, so that they are no longer legible. They are like Stalin in his desire to expunge a purged person, such as Yagoda, not only from the written record but also from the photographic record. The new owners of secondhand books not only do not want the name of the previous owners to be legible, it is as if they wanted them never to have existed. In the days before black felt-tipped pens, which can erase all trace of a person’s name at a stroke, or in effect throw him into an unmarked grave, the name was often scratched over repeatedly, with a strange assiduity, until no letter of it was legible. I have examples of this peculiar conduct dating back to the 18th century.