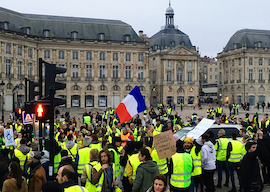 This is surely a very odd way of putting it, indicative of a deep-seated way of looking at the world. It conjures up a picture of a miserly government hoarding its treasure as in a cave, allowing a little to leak out to the general population from time to time, usually to stop or prevent it from taking to the streets in protest. In fact, French government debt is about equal to the country’s entire domestic product, and its budget has not been balanced for four decades or more. It borrows largely to prop up the unearned income of the population so that it can continue to spend more than it earns.

So from where, exactly, is the money to be “unblocked”? It could, of course, be taken from some other part of the budget, but this is unlikely because any reduction elsewhere would lead to voluble protest by the sector affected, with the support of those who see any reduction anywhere as but the thin edge of the wedge. It could come from further borrowing: After all, 10 billion is neither here nor there in the context of a debt of 2,000,000,000,000. It could come from further taxation, but this would have to be very carefully directed because it is the burden of taxation that has made the supposed “unblocking” necessary in the first place. Or, in the good old days, it could have come by simply debauching the currency, by printing more money so that, in effect, the government canceled, or very much reduced, its debt. But France’s room for maneuver in this respect is now severely circumscribed; for historical reasons, its German neighbors, who now prop up the currency that they share, are averse to debauchery of that currency.

“Whatever else may be said, there are no funds to ‘unblock’ to give the children more pocket money.”

Whatever else may be said, there are no funds to “unblock” to give the children more pocket money. There is no treasure being carefully guarded by dogs with eyes as big as saucers. This is so blindingly obvious that the fact that no one, not even conservative-leaning writers, remarks upon it, or protests against the absurd misuse of the word, is itself of great significance.

President Macron is often called the President of the Rich. Why? Principally because he suppressed the tax on capital known as the impôt sur la fortune, the ISF. Many people say that he has given the rich “a present” by doing so. Very few people understand that this too is a very odd, not to say deformed, way of putting it. To refrain from taking money from someone is now to give him a present, which suggests that he had no right to the money in the first place, and that what remains to him is only by grace and favor. The government is rightfully in the position of Richard III when he says to the Duke of Buckingham, “I am not in the giving vein today.”

According to two academics who have looked into the demands of the so-called Yellow Vests, whose movement has humiliated President Macron, the revocation of the suppression of the tax on capital is foremost among them, and this is so irrespective of the economic rationality or otherwise of the tax, which in fact is very rarely discussed.

The tax raises little, at least by comparison with the total government income. It has driven a lot of capital, capitalists, and well-to-do abroad. The point seems entirely lost on most of the population that you don’t necessarily raise the most revenue by taxing very highly, as if people with money were simply a herd of unmilked cows in a rich pasture, ever able to produce more.

I suspect, however, that even if people were to grasp the point that wealth is dynamic rather than static, and that it is likely that the tax on fortunes (which, incidentally, do not have to be vast before being subject to it) actually lowers the amount of tax raised overall, they would still be in favor of the tax. This is so because its symbolism is more important to them than its effect, and hatred of the rich is an emotion that must be sated somehow.

Hatred is, of course, a much more powerful political emotion than love. Hatred is strong, love (except of individuals) is feeble. I can hate a distant enemy much more than I can love a distant friend. Perhaps we should like this not to be so, but it is so.

This is not to say that there are no ill-gotten gains or that our society rewards people with perfect justice or fairness. Tell me who you think is overpaid and I will tell you not only what your political opinions are but what tastes and values you have. Indeed, it would be an interesting experiment to perform, to ask people to name the two or three groups of people whom they consider the most overpaid, giving them no time to prepare an answer but rather demanding an immediate and spontaneous reply, the immediacy and spontaneity being a guide to their innermost feelings without intellectual overlay.

If I were asked such a question, I would reply: professional footballers, chief executives of large public companies, and members of the European Parliament.

When I think more carefully about the problem, I realize that at least one or two of my visceral reactions might be caused more by resentment than by reason. I acknowledge that professional footballers these days are extremely skilled, in fact for a number of reasons much more so than the professional footballers of my youth (they are faster, fitter, and stronger, and the conditions in which they play are much more conducive than they were to the exercise of skill). It is just that it is a skill that, however great of its type, is not one that I admire by comparison with that, say, of a great pianist or even entomologist or classicist.

But then the question arises as to who is to determine the scale of values by which people are to be paid fairly. I would not entrust the job to myself, let alone to anyone else.cI prefer the present system, despite its manifold corruptions and injustices, to that of one dictated by a person or group of persons who would determine rates of pay according to a laid-down set of supposedly fair prices. And this is so even though I consider myself to be grossly underpaid by comparison with footballers.