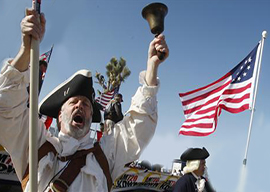 Other than being the highest-profile Republican victims of Tea Party candidates, what do Mike Castle, Charlie Crist and Arlen Specter have in common?

Other than being tea party insurgents who routed establishment Republicans in high-profile primaries, what do Joe Miller, Marco Rubio, Christine O’Donnell, Pat Toomey, Sharron Angle in Nevada, Ken Buck in Colorado and Mike Lee in Utah have in common?

The answer, writes Tim Carney of The Washington Examiner, is that all the former are pro-choice on abortion, all the latter pro-life.

Tea Party types and pro-life conservatives seem to be twins separated at birth. Carney continues: “Almost without fail the strongest advocates of limited government in Congress are pro-life and vice versa. Think of (Jim) DeMint and (Tom) Coburn in the Senate and Ron Paul and Jeff Flake in the House. They top the scorecards of the National Taxpayers’ Union and also have perfect scores from National Right to Life.”

Carney’s point: While all Tea Party insurgents and Tea Party-backed candidates seemed to agree on the economic issues—deficits, debt, taxes, Obamacare—they also seem united on other issues. Looking at the down-ballot battles in 2010, being pro-life is just one of them.

Three Iowa Supreme Court judges who ruled that the state constitution requires recognition of same-sex marriages were denied retention, and Gov. Terry Branstad campaigned for giving Iowans a referendum to decide if they wish to outlaw it.

“Made in China has replaced Made in America. And as one drives through cities and suburbs, one encounters vast concentrations of people who speak some language other than our own.”

Tea Party types and Iowa conservatives were not only opposed to the idea of men marrying men, they detest the idea of judicial dictatorship.

In Arizona, Ward Connerly’s anti-affirmative action initiative, which prohibits race, gender and ethnic preferences, won with 60 percent of the vote. Michigan, California and Washington have already adopted the Connerly amendment.

Tea Partiers also united to back the Arizona law that requires cops to determine the immigration status of any whom, in a routine police encounter, they suspect of being an illegal alien.

Passage of the law last April brought crazed comparisons with Nazi Germany. Opponents tended to go mute, however, when they learned that 70 percent of America stood with Arizona. GOP candidates for governor subsequently ran on pledges to adopt similar statutes.

In Oklahoma, a proposition to prohibit use of Shariah law in state courts passed with 70 percent. Shariah law is the basis of law in many Muslim countries, as the Bible was once the basis of much law in America.

What do these overlooked stories of Election Day 2010 teach?