Tears of a Tyrant 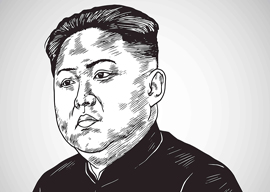 I think it was Jean Améry who said that once you have been tortured you remain tortured. I do not mean to claim any kind of equivalence in the experience, but once you have been to North Korea, you never forget it, either—as, for example, you might forget whether or not you have ever been to Stevenage or Welwyn Garden City. North Korea is at one of the unpleasant edges of human possibility.

Ever since I went to North Korea as part of a British delegation of youth and students (though I was neither a youth nor a student at the time), I have been drawn to pictures of the Kim dynasty, whether of Kim the First, Second, or Third. There is a fascination to this horrible family that makes the Borgias seem like philanthropists (the Borgias certainly had better taste); and you feel, as you look at pictures, that if only you stare long and hard enough at them, you will pluck out the heart of their mystery—an absurd notion, of course.

There was a large picture of Kim Jong-Un in The Daily Telegraph this week as he visited the hospital to which the survivors of a bus crash had been taken. Dressed in a white coat, he leans over the side of a bed, bringing comfort to its injured occupant. Next to him are two doctors, also in white coats, taking notes of the pearls of medical wisdom and advice that fall from Kim’s lips. Not a word of that wisdom must be lost for posterity; for when a Kim speaks, The Lancet and The New England Journal of Medicine become redundant.

“It is not easy to imagine Kim losing much sleep over a mere 32 people killed in a bus crash.”

Men with notebooks standing behind leaders and taking down their precious words were a constant of communist iconography. Someone like Ceausescu had only to step into a turnip field for him to become the greatest expert on growing turnips the world had ever known. Usually the leader was dressed in some kind of pseudo-proletarian costume, with or without a specially tailored cloth cap. (Ceausescu, incidentally, was much influenced by Kim Il-Sung. There is a wonderful film of Kim’s state visit to Romania in 1975, available on YouTube, in which Kim dances with Romanian pseudo-peasants in colorful national costume. How communist dictators loved folk dancing!)

At first, it occurred to me that the scene with Kim in the hospital was staged; almost everything in North Korea is, at least everything in which Kim appears. But then I saw that this was not staged, but real. How did I know?

I hesitate to mention it, because it might get people killed—in North Korea people have been killed for less. But I noticed that the side rail of the bed in which the patient lay was in terrible condition. Its white enamel and blue paint were as chipped, and the metal underneath as rusted, as they would have been in, say, Mauretania or the Central African Republic. If it had been a proper North Korean mise-en-scène, of the kind I witnessed for myself all those years ago, the bed rail would have been gleaming. The chipped enamel and paint, and the rust, were a rare glimpse of reality and gave the game away.

According to the accompanying article, Kim said that “the unexpected accident brought bitter sorrow to his heart and he couldn’t control his grief at the thought of the bereaved families who lost their blood relatives.” Unfortunately, Kim does not have the kind of face that easily conveys emotion; and while it is true that the ability to commit mass murder is not incompatible with the grossest sentimentality—indeed the two often seem two sides of the same coin—it is not easy to imagine Kim losing much sleep over a mere 32 people killed in a bus crash.

Still, our own politicians are increasingly given to hyperbole over the emotional impact upon them of accidents or disasters. They think that extravagant displays of emotion are required of them, and perhaps they are right. Any leader who doesn’t rush immediately to the scene of a disaster and utter heartfelt platitudes is regarded as a monster of coldheartedness who will lose the next election. We have forgotten that empty vessels make the most noise and demand not so much our pound of flesh as our flow of tears and outpouring of cliché.