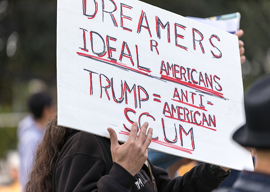 Usually the vibrant cultural diversity that immigrants bring runs more along the lines of child rape, drunk driving and food stamp fraud. But our official government policy of importing the Third World also means we’re going to have a lot more elder rape, too.

Thank you, Teddy Kennedy! Something for the seniors.

I was recently reminded of this aspect of diversity because, a few days ago, jury selection began in the trial of illegal alien Victor Aureliano Martinez Ramirez and anchor baby Jose Fernando Villagomez for the rape, torture and murder of 64-year-old Marilyn Pharis.

Pharis was attacked in 2015, just a few weeks after Kate Steinle was killed by an illegal in San Francisco—a wondrous moment in time when Donald Trump wanted to deport illegals, rather than call them “Dreamers” and give them amnesty.

Like Steinle’s killer, Martinez Ramirez had a lengthy and impressive arrest record in this country, including felony assault with intent to commit sexual assault. A week before his violent home invasion, he was released from jail on drug and weapons charges.

We don’t know the details of the recent attack because the perps have VIP status, requiring the utmost discretion from our media. But based on what is known, the crime sounds pretty gruesome.

“We don’t know the details of the recent attack because the perps have VIP status, requiring the utmost discretion from our media.”

Pharis was attacked at 10 in the morning, at home, sleeping in her own bed, after working a night shift at Vandenberg Air Force Base. According to the dry legal charges and hospital report, she was penetrated with a “foreign object” and beaten with a hammer, leaving her with a broken neck and broken eye sockets. Pharis survived, managed to call the police and was taken to a hospital, where she died eight days later.

While we wait for the trial transcript, here are a few more examples of this multicultural trait we are importing for no good reason.

Sergio Martinez-Perez was the sort of hardworking undocumented immigrant from Mexico we keep hearing so much about from elected Republicans angling for campaign donations from the Koch brothers. He “played by the rules,” working in Omaha, Nebraska, as a roofer. (Roofing is well known to be a job Americans just won’t do.) Only 19 years old, Sergio was a “Dreamer.” They’re “absolutely incredible kids!”

One summer night in 2013, Sergio got drunk and broke into the home of 93-year-old Louise Sollowin, savagely beat her, breaking her nose and orbital bones, then ripped off her adult diaper and raped her. Sollowin’s daughter had put her mother to bed earlier that night. When she returned at 8:30 the following morning, she found Sergio lying naked and passed out on top of her mother’s bloody body. Three days later, Louise Sollowin died.

Sergio would already have been on a bullet train to legal status had Marco Rubio’s amnesty passed. (Just think of all the Sergios a Trump amnesty will get us!)

Mexican illegal immigrant Victor Manuel Batres Martinez raped, sodomized and beat two nuns in their 50s, strangling one to death with her own rosary beads. By the time of his nun-rape in 2002, Martinez had already been arrested multiple times before for kidnapping, robbery and possession of narcotics. Under the rigorous immigration enforcement procedures of the Clinton and Bush administrations, Martinez had been “ordered” deported three times, meaning he signed a note three times promising to leave.

In 2013, Antonio Nieto, a certified nursing assistant, was convicted of sexually assaulting patients in a nursing home. The staff didn’t believe the first victim, a 59-year-old woman, who was considered a complainer for objecting to the facility’s oppressive anti-smoking rules. This allowed two more female patients to be sexually assaulted by Nieto, one 73 years old, and the other 93. (Always believe the smoker!)

In 2008, a rash of rapes of women older than 60 in Texas finally ended when the police arrested Jose Ayala Nunez, a Honduran illegal immigrant, who later pleaded guilty to the assaults.

Isn’t a wall beginning to sound like a deal at any price?