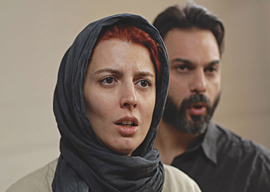 The Iranian film A Separation, a domestic drama-turned-courtroom mystery, is among the most acclaimed of recent movies. It won a host of film festival awards, the Best Foreign Language Oscar, and a nomination for Best Original Screenplay”a rarity for a subtitled film. This half-million-dollar movie is even turning a profit at the US box office, with revenue approaching $4 million and rising.

A Separation is a fine film with an exceptional plot. Writer-director Asghar Farhadi drops in well-timed plot twists that are intriguing yet realistic. In the opening scene, a Tehran yuppie couple (the wife an English teacher, the husband a banker) addresses an unseen divorce-court judge. She wants to emigrate, presumably to the US, but he won”t leave his senile father behind. The judge refuses to divorce them. The banker then hires a poor woman to care for his father, only to wind up back in court, accused of causing his new servant’s miscarriage. Much shading of the truth ensues.

Still, two hours of Persians bickering under fluorescent lights isn”t a feast for the eyes. The universal and strenuous praise for this admirable but limited middlebrow film is sincere, but it’s amplified by multiple political motivations.

“It’s hard to live in LA and take seriously the Washington/Tel Aviv storyline of Iran as the new Nazi Germany.”

Were the Oscar voters trying to send a message to Washington by honoring this film? I suspect so. It’s hard to live in LA and take seriously the Washington/Tel Aviv storyline of Iran as the new Nazi Germany. That’s because the Westside is full of Iranians, many of them Jews; yet they make frequent visits home to see their kin. I don”t think Einstein vacationed in Berlin in 1939.

Sure, Persian Jews prefer Beverly Hills to Tehran, but they don”t take AIPAC’s fearmongering seriously. In reality, Iran is a ramshackle place that hasn”t been sufficiently organized to invade another country in at least 150 years.

Many critics view A Separation as a welcome attack on Iran’s fundamentalist Shiite state. Yet the Iranian government sponsored A Separation as its official Oscar entrant. Last week, Tehran television trumpeted its Oscar win over an Israeli film about Talmudic scholars, Footnote, as “the beginning of the collapse of the influence of the Zionist lobby over American society.”

By banning movies from the Great Satan (although it’s easy to buy Hollywood films in Tehran on DVD), the Iranian government facilitates a sizable commercial film industry. It mostly tolerates, and sometimes even subsidizes, an art-house segment for international prestige.

Still, the mullahs occasionally lock up an auteur to encourage the others. It’s a complicated system, but not one that, say, mainland Chinese filmmakers such as Zhang Yimou (Hero) would find unfamiliar.