Television Is an Evil 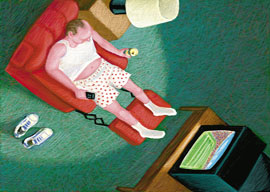 Most people read to confirm their prejudices rather than to learn something new or change their minds. Moreover, they recall what confirms their opinions much better than they remember what contradicts them. So aware was Charles Darwin of this human tendency that, at least according to his Autobiography, he wrote down anything he read that contradicted his views, for otherwise (he said) he was sure to forget it.

I must admit that like most of humanity, I am not as honest as Darwin and am reluctant to give up my cherished beliefs even in the face of facts that contradict them. I do on occasion change my mind about something, but slowly and usually without acknowledging that I have done so. I prefer to think that the opinion I now hold is the opinion I have held all my life, rather as Kim Il-sung emerged, according to his hagiographers, as a fully fledged Korean Marxist-Leninist revolutionary by the age of eight. To acknowledge that one has changed one’s mind about something is to admit one’s fallibility and the possibility that if one was wrong before, one might be wrong again. And in our hearts we know that we are always right.

“There is something about the evil little screen that would sully a saint and sanctify a monster.”

That is why I was overjoyed recently in Paris to find a well-documented book that confirmed one of my deepest prejudices, namely that television is, if not the root of all evil, at least the root of much evil. That is why I haven”t had one for more than forty years. The book was called TV Lobotomie, which hardly needs translation.

The man who put the first germ of the prejudice against TV in my mind was Malcolm Muggeridge, a now-forgotten British journalist who, bizarrely, emigrated to the Soviet Union in the 1930s in search of a better life. Far from finding the paradise he had expected, however, he found a kind of hell. During the Ukrainian famine he sent back truthful reports to the Manchester Guardian (now the Guardian), which published only some of them. He was particularly outraged by the Western intellectuals who took starvation for plenty and tyranny for freedom, and he satirized them mercilessly in his book Winter in Moscow.

Later in his life he became a fervent and somewhat unctuous Christian, by no means a popular thing to do in the 1960s. Perhaps he did so because it was his temperament to swim against the tide. Be that as it may, he also denounced television from his pulpit”which was, of course, television.

He denounced it with all the fervor of a temperance preacher denouncing gin or of a modern public health official denouncing tobacco. At first I laughed at him, but then I saw that he was quite right. Television is an evil.

There is so much to be said against it (and its televisual offshoots) that it is difficult to know where to begin. In my opinion, televisual entertainment is by far the most important cause of boredom in the world, and since the attempt to relieve boredom is a much underestimated cause of social pathology of all kinds, television is ultimately responsible for the squalor in the midst of wealth that is so remarkable a feature of our modern existence.