Tell It to the Saudis 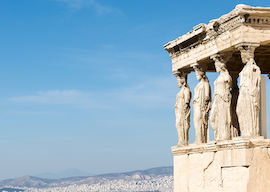 This is party time in Gstaad. From the richest billionaires down to some impoverished souls with only a few million to their name, “the joint is jumpin’.” Last week one tycoon converted his mega-chalet into a nightclub and the music bombed away all night. Everyone who attended turned into Beethoven after one hour, which in a way improved the situation. People talk such rubbish nowadays, it was a relief to point at one’s ears and horizontally shake one’s head. I did not last long. I’ve been deaf ever since. My son came home at 5 a.m.

Next week is an Italian countess’ blast from the past. I hope there will be the Shimmy and the Black Bottom and the Charleston, but I doubt it. She is a childhood friend and a widow, and she’s taken over the Palace ballroom and the mother of my children will attempt her first outing after the crash. I’m looking forward to it as I’ve been lying low doing a winter karate camp that left me exhilarated and bruised. My “sensei” Richard Amos put me through the wringer. Karate, gym with weights, cross-country skiing, and a downhill or two when the sun’s out, that’s what it’s all about. Otherwise, it’s Dubai with snow, glitz, ghastly people, and a few friends. Well, it could be worse, like Bahrain, for instance.

Books, of course, come in handy. And newspapers. Apparently socialism is on its way, hence the partying as the Titanic begins to tilt. Let’s face it: There were millions of educated people who fell for communism even after the gulag and the show trials had become public knowledge. So why should they not fall for the lesser evil of socialism? As Orwell once observed, “There are some ideas so absurd that only an intellectual could believe them.” There is a new congresswoman in that place west from here who wants to abolish flying in order to save the planet. I’m all for it. First-class passage on a liner is much more fun than being squeezed inside a steel tube and being in close proximity with smelly but rich proles up front. Possibilities of shipboard romance flicker through my memory. Let’s get rid of airplanes, save the planet, and all find romance on the high seas.

“Let’s get rid of airplanes, save the planet, and all find romance on the high seas.”

Last week I read an article by an American woman who obviously is badly in need of hypnotherapy and electroconvulsive shock treatment. She wants to be like the Greeks, the ancient ones up on Olympus. She takes on the myths and connects her unhappy experience with a 17-year-old boy—she was 14—with Artemis, the Greek goddess who assassinated Actaeon for spying on her as she bathed. The American lady calls Artemis powerful for her overreaction. Poor Actaeon, no Harvey Weinstein he, all he did was sneak a peek, and didn’t even bother to expose himself like a Hollywood type.

So now you have the not-so-mythical Hollywood types on a par with the mythical Greeks. It’s a very silly world, so I’m not surprised to read some very silly things. If socialism has done wonders for Venezuela and Nicaragua, and flying is about to ruin the planet, why not get rid of free enterprise and everything that goes with it? Once that’s done with, everything will be hunky-dory, or so these American socialists tell me. But back to the Greek myths and #MeToo. The American writer wonders about the word “rape,” as in the Rape of Persephone. She thinks Hades is a real prick for taking Perse down the yawning pit. I agree, Hades was a terrible shit. Then she gets mad as hell with Apollo because all the nymphs love him and sit at his feet and listen to his music. I can imagine how humiliating this must be to a #MeToo disciple. So she tells her son, aged 9, and her daughter, aged 6, that she no like this. Again, I understand. Apollo was a male chauvinist pig, but he sure knew how to play the harp, even better than Harpo Marx.

This female American Homer then goes on to spread the wisdom some more. She praises Artemis for being a cold and pitiless goddess, announces that Hera gets on her nerves (most likely because she couldn’t stop her hubby Zeus from scoring left and right), and points an accusing finger at Poseidon for raping Medusa. Then the poor girl gets a bit confused. (The writer, not Medusa.) “Like many abusers, Poseidon faces no personal consequence. Athena can’t reach him with her wrath because he is too powerful, and so she ruins Medusa instead. Snakes for hair, reptile skin.” In other words, Medusa was punished for being raped. I think the lady and I have read different books on this one. Mind you, some of those shrill feminists do remind me of Medusa, so if Athena gave them that look, good for Pallas Athena. I’ve had lots of problems with Poseidon’s moods all these years of sailing, but I forgive him now that he did the dirty deed with poor old Medusa.

But no more digressing. This moronic American woman should concentrate on women’s nature, which is always of a finer texture. Concentrate on women’s courage and women’s strengths. Stop complaining and stop reading the Greeks in order to prove that men have always been shits. And head for Saudi Arabia and read the towels the riot act. They need it more than we do.