Tennis Is the Best Medicine 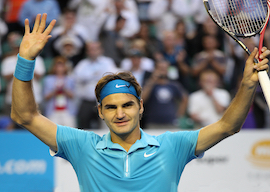 Asked how he was feeling as he was about to give a speech to a ladies’ group, Mark Twain looked horror-stricken and said: “How do you expect me to feel? Shakespeare is dead, Goethe is dead, and I have a terrible cold.” Alas, I’m no Twain, but I feel worse than the Mississippi sage ever did, that I’m sure of. Having gone cross-country skiing underdressed in bone-chilling temperatures didn’t help. I now sneeze about 150 times per day, I’m aching all over, my nose is running as if I had shoved two ounces of Peruvian pure up there, and my head feels stuffed with poisoned marshmallows.

So, last Sunday, unable to read, I decided to improve my mind by watching television, the device that has made Western man a superior human being. Believe it or not, the horrible device brought back some very pleasant memories: May 4, 6, and 7 of 1967, to be exact. I went to the guest loo to check the date and look at the picture hanging on the wall. There we were, the four of us in our blazers and tennis shorts, under the heading “Coupe Davis,” and beneath our picture in enlarged letters: “Suisse–Grèce, Parc des Eaux-Vives, Genève.”

The reason for this trip to yesteryear was the Federer–Tsitsipas Australian Open match late on Saturday, one that the Greek won in four sets, causing one of the great upsets in tennis. I watched the whole four hours, something I have never done before, not even when I was on the tour and friends were playing. Which makes it 52 years since a Greek beat a Swiss in tennis, although the 1967 Greek triumph was not exactly kosher. Three of us on the Davis Cup team had developed our tennis skills abroad, and the star of the Swiss team was a Romanian prince, Tim Sturdza, who was a better prince than a player. My doubles partner, Nico Kalogeropoulos, won both the French and Wimbledon junior titles in 1963, and he and I won the Greek national doubles title regularly. Nico also got to the round of 16 at Wimbledon once, losing to Fred Stolle, a finalist that year.

“Roger began looking at his feet between points, another bad sign.”

The Swiss back then were not exactly dangerous, although Tim the prince was angry at Nico and myself for bird-dogging his girl, a German player on the circuit whom I choose not to name. I, of course, managed to lose in five sets to Werren, but Nicky won both his singles and the doubles with a new partner because I had been ruled ineligible by the captain, one Mr. Alepoudelis. Alepoudelis, which means “tiny fox,” knew as much about tennis as I know about coprophagia, but he was nevertheless named captain because he had a factory that made soap in Athens. His brother, a poet, won the Nobel Prize in Literature about ten years later, under the pseudonym Odysseus Elytis. (Check it out.)

I had broken bounds earlier and gone to the Bataclan, a notorious Lausanne nightclub, and had bragged about it to the team. That was enough for the little fox. He kept me out of the doubles and my chance to play against Tim Sturdza, who was bad-mouthing me over the girl. The prince at present has a very successful brokerage house in Geneva, offering all sorts of profitable funds to the public, but I’m too scared to go near. Romantics tend to keep a grudge. Nico and I ran into the lady player 25 years ago in a veterans’ tournament and were aghast at how badly she had aged. Tennis does not do wonders for a woman’s skin or shape in later life. Try swimming, girls.

I know nothing about Tsitsipas except that he was born in Greece and grew up there. His mother is Russian, hence his 6-foot-4 height and blond hair. What I loved about the match was the free-flowing hitting by both players, and their one-handed backhands. Tsitsipas mirrors Federer, but although you’ll have to trust me on this, Roger looked a loser after winning the first set on a tiebreak. Twelve chances for a break in the second were saved by the Greek, which means the great Roger was tightening up. At one set apiece, Federer looked mentally tired. What mentally tired means in tennis is one makes the wrong choice of shots. One tries to end the point early, or plays safe.

The Greek began hitting all-out once he got the lead. That’s what champs do, suckers play it safe. And Roger began looking at his feet between points, another bad sign. It was a great victory for a 21-year-old who will go places. But I felt bad for the greatest of them all. His elegant and impeccable strokes, his manners on court—he doesn’t groan like a wounded animal every time he makes contact with the ball—and his sportsmanship will never be topped. I only hope someone will try to imitate him. But Roger should call it a day. Or play only best of three. Personally my three tennis heroes are Gottfried von Cramm, Roy Emerson, and Roger Federer. All three pure, clean hitters with impeccable manners. Last piece of advice to Roger, however unsolicited: Keep Anna Wintour out of your box. Every time she visits, you blow a lead. She’s very bad luck.