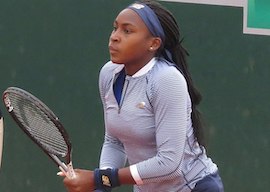 Martina Navratilova has never been shy telling it like it is. She came out when other athletes were hiding in their lockers, and recently spoke out against men transitioning into women in order to cash in at women’s events. She is brave and refuses to be intimidated. Last week, while the Centre Court crowd was going ape cheering for Coco Gauff, Martina was the only commentator to question the fairness of it: “I wonder how Hercog must feel having 15,000 people hate you and cheer your every mistake to the rafters?”

Mind you, sportsmanship is a thing of the past, and Wimbledon crowds now act like football fans. And while Coco is only 15, is African-American, and plays like a dream, her opponent did not deserve her double faults being greeted with loud cheers. Her sin was that of being white and blond, and if anyone was an underdog, it was the Slovenian loser. Coco’s Wimbledon box was packed with coaches, her parents, emotional enhancers, masseurs, hitting partners, strategists, you name it. There were about ten. Hercog’s box was empty but for one man, who looked on expressionless. I imagine Coco has more sponsors knocking on her doors than I’ve had hangovers, and the Slovenian perhaps one, if any, yet it was the latter who was the baddie in that drama.

Crowds are the last to know or understand anything, so I was not surprised, but it is the politically correct asswipes of the media who drive public opinion, even in the rather effete game of tennis. Listening to female commentators, especially American ones, makes one yearn for the days of old—the days of understatement—such is their hyperventilation over the Williams sisters and now Coco. I suppose if they weren’t so admiring of them they’d be called racists. Incidentally, the long three-set match that Coco won fair and square was terrible tennis. They both pushed the ball, except that Coco was a bit less scared to stroke it than the Slovenian. But choking by both players was the order of the day.

“I imagine Coco has more sponsors knocking on her doors than I’ve had hangovers.”

Never mind. I had a wonderful time in London, especially reading about a man whose older brother died from a Viagra overdose—they had a hard time fitting him in a box because of his stiffy—and whose wife has now left him because, I assume, he’s much too ugly to look at every morning. Mohammed Al Maktoum’s wife, Haya, is a Hashemite, the only true royal family in the Middle East. The rest of them are ex–camel jockeys who awarded themselves highfalutin titles once oil was discovered under their sandy hellholes. This guy Maktoum has a lousy record with the fairer sex. His daughter ran away and was brought back under guard, and now King Hussein of Jordan’s daughter has also done a runner. Good for you, girls, Saudi and UAE men are the biggest bluffs in Africa—without moola they’d be cleaning Israeli toilets for a living.

London this time was a dream. Although not feeling my best, two doctors fixed me up in a jiffy. First Dr. Morgan, an ex-submariner who fought in the Falklands, diagnosed something and sent me to a specialist, Professor Narula, a Spectator reader who made room for me because of the dear old Speccie. The most charming of men, he sent me downstairs to a very attractive and blond Dr. McLean, who stuck some contraption on my throat and announced me healthy. “This is Taki,” said the prof. “I read you,” said the attractive doc. “Better tell your hubby or your lover that you’re coming on the boat with me this summer,” said I. “I’ll tell both of them,” said the sexy doc.

What can I say? Happiness is having a Speccie column and meeting such wonderful doctors as the three I just mentioned. Or when another reader, Nicholas Glass, comes all the way from Vancouver for a chat and a drink. Then came the two Spectator parties. Me speaking: “Georgie, this is Con Coughlin, the Telegraph’s foreign editor.” Georgie: “I used to work for the Telegraph.” Con: “Why did you quit?” Me: “Because she became a duchess.” Con: “Good career move.” The operative name is Beaufort.

The highlight of the party was meeting the Hungarian ambassador—my NBF—who is as good-looking, tall, and charming as his country is brilliant in remaining a Christian European nation and to hell with the phony rubbish of Brussels. More Orbans and Salvinis is the answer, but look what Brussels just came up with, a Lagarde and a Michel, two tainted career bureaucrats whose oleaginous manners could suck the chrome off a 1955 Cadillac.

The Spectator’s readers’ party was, as usual, the nicest of all. You all know who you are and what a pleasure it was to meet you, not a single smug person among you. I sat with my very brave friend Aidan Hartley and his son and I asked him about his dangerous life in Africa, a continent he loves so much. He brushed my fears away. Brave men and women never brag. The ones who do are phonies. My big fight is with state-enforced morality, the sneering elite telling poor little me how to think and how to live. But bullies are cowards, and all one has to do is shoo them away like flies. I’m off to the Greek isles and Homer’s wine dark sea.