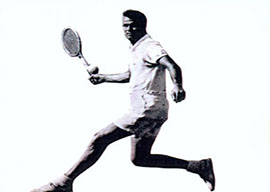 I do not have many friends who are 97, but tennis legend Gardnar Mulloy is one of them. It is not clear why I should be so lucky to know him, nor why I should have had the opportunity to square off against him on the tennis court. When I first played him singles in the mid-1980s, Gardnar was somewhere north of age 75. He had been inducted into the Tennis Hall of Fame in 1972 after having been ranked #1 in both singles and doubles in the early 1950s and winning numerous championships in both categories.

Our first encounter was on the clay courts of the sleepy tennis facility at the Coral Gables Country Club in Miami. I figured, Hey, this fellow can’t hurt me too bad. Bunny Smith, Gardnar’s long-time sidekick, was the pro at the club and suggested the match. Although she was a friend of mine, Bunny failed to warn me about Gardnar’s lethal forehand. It was flat, hard, and accurate. It hurt me plenty. Gardnar’s backhand was nothing shoddy, either. I believe the score was 6-2, 6-3.

I gradually was able to figure out Gardnar’s game. My game improved just by playing him. His forehand lost some of its punch along the way. Occasionally I could beat him, but it was always a real challenge. He was dead-set against losing to anyone, ever”his first book’s title was The Will to Win. He was hard on himself if he missed a shot but always gracious in a loss.

Gardnar was noteworthy for idiosyncrasies on the court. He had this weird habit of serving with all three balls in his hand. He almost insisted on it. This made no sense to me, but it was part of his bag of tricks. When receiving serve, he often held the racket in front of his face with the rim right up at his nose so he was peeking around both sides. You couldn’t read him that way. It was deliberate. In doubles when serving, he sometimes would hit the receiver’s partner with a surprise line drive, then announce the point in his favor and nonchalantly move over for the next serve without further comment. Quirky, but perfectly legal.

In recent years Gardnar has slowed down a bit, but not long ago he got married for the second time, and now he has published his second book of memoirs, entitled As It Was, which greatly expands on The Will to Win. Packed with all sorts of odd episodes from his long career, it is a first-rate item of 20th-century Americana.

“He had this weird habit of serving with all three balls in his hand. He almost insisted on it.”

Despite its focus on tennis, a lot of the book takes place off the court. Mulloy tells about growing up along the Miami River and his WWII naval experiences. He saw action in Italy and North Africa, and it made a lasting impression.

I recently posted an article here about Pearl Harbor and FDR. Gardnar relates an amazing 1939 incident in Tampa, where he was playing at a long-defunct event called the Dixie Championships. One evening after the matches, he was discussing the war in Europe with three other players. He said the US should not get involved fighting Germany like it had in World War I. Henry “Hank” Prusoff, then ranked #10 in the US in singles, piped up: “I wouldn’t worry about Germany, because we will be fighting Japan soon….The Japs are going to bomb Pearl Harbor.”

This was in 1939, mind you, and Gardnar, then ranked #8 in singles, had never heard of a place called Pearl Harbor. Prusoff was from the Seattle area and stated that Japanese “tourists” were taking photos of Seattle’s harbor and how an imminent bombing was “the general talk.” Prusoff knew that Pearl Harbor was the biggest US naval base in the Pacific. It was perfectly logical that Pearl Harbor would be the target. Or maybe he was a clairvoyant.

Gardnar half-jokingly suggested that if Prusoff was so sure, President Roosevelt should be immediately informed about this imminent attack. The other two players mockingly agreed with Gardnar that something had to be done:

“[W]e ushered Prusoff into the pro shop and made him write his allegations in a letter to the President of the United States. After reading the letter and with a return address, it was stamped and I personally dropped it in a mail box.”

Two years later, Japan bombed Pearl Harbor, and Gardnar was in shock. No copy had been made of the warning letter he”d sent to Roosevelt. In the meantime, according to Gardnar, Hank Prusoff had died “in an elevator accident.” Gardnar states in As It Was, “My feeling is that our government had to be aware the bombing would happen because, if nothing else, someone in the administration had Hank’s letter!” Gardnar contacted the two other tennis stars, Bryan “Bitsy” Grant and Harold “Hal” Surface, to verify the incident. Grant said he remembered it and was just as bewildered as Gardnar. Hal Surface refused to comment. Prusoff’s letter probably exists in a manila envelope somewhere in the National Archives, stamped TOP SECRET in red alongside voluminous other documents attesting to Roosevelt’s foreknowledge of the “sneak” attack.