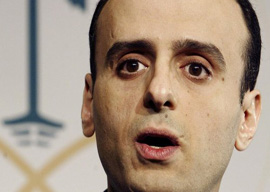 Last week brought news of a purported Iranian plot to assassinate Saudi Ambassador to the US Adel al-Jubeir, but the whole murder-for-hire story may have already imploded by the time you read this. Skepticism is rampant. Aside from the insufferable, trigger-happy neocons, nobody who knows anything is buying the official version as enunciated by Eric Holder, Barack’s Attorney General. Holder is the same Washington functionary who green-lit the Marc Rich pardon on the last day of the Bill & Hillary Clinton Administration.

FBI Director Robert Mueller was also at the press conference on October 11th and backstopped Holder’s implausible narrative about the alleged plot—“conceived, sponsored, and directed from Iran”—to have a Mexican drug cartel kill the Saudi ambassador by blowing up a fashionable Washington restaurant with plastic explosives. But Mueller and his FBI have lost significant credibility with PBS’s airing of The Anthrax Files, which appeared the same day as Holder’s press conference.

“Wouldn’t it be great if Washington could send a special ambassador to Tehran to sort out the matter?”

The used-car-salesman-turned-terrorist who is now behind bars is an Iranian American named Manssor Arbabsiar. Manssor traveled between Iran and Mexico during the summer, supposedly to arrange the hit on the Saudi Ambassador in Washington. Putting aside the apparent lack of any rational motive by Tehran, some important factual details remain unclear in the 21-page indictment filed in New York federal court.

For instance, how did Manssor first make contact with a leader of Los Zetas, the crazed Mexican drug cartel, who also just happened to be a paid DEA informant? Was this sheer happenstance or was Manssor pointed in that direction? Did the business start out as a drug deal and then get sidetracked into an assassination plot? Was Manssor attempting to act as a middleman to sell Iranian opium to Mexico?

At what point in the proceedings did the FBI make the hapless Manssor aware that he was involved in a sting operation and that he should cooperate to implicate the alleged co-conspirators in Tehran? The government states that Manssor has already admitted under questioning that he conspired to kill the Saudi Ambassador. If that is so, why has Manssor’s lawyer stated that Manssor will plead not guilty if indicted by a grand jury?