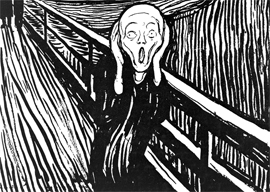 Weird, huh? I didn’t even know that was possible.

For at least a generation, we’ve been browbeaten about the fact that the USA is mostly a white nation. Even most white people seem convinced that there’s something uniquely wrong with white people. But the professional browbeaters couldn’t stop there.

They insisted on taking it up a notch by tacking on the word “supremacist,” as if they couldn’t be satisfied with already staining “white” beyond repair. It mattered not that hardly anyone alive fits the dictionary definition of a white supremacist. The very fact that you dare to question their moral authority gets you labeled a white supremacist—you white supremacist, you.

Now, before the gun smoke has cleared and the corpses have stiffened from last week’s mass shootings, they’ve flipped all the cards and are ushering in a White Scare that is far more paranoid and baseless than the 1950s’ “Red Scare” that they keep insisting was paranoid and baseless. If you suffer the misfortune of being white, it’s far more dangerous than the Red Scare ever could have been.

“The entire media, all of big tech and academia, both political parties, and even that infamous Nazi Donald Trump are all aggressively opposed to the idea that white identity is a good thing.”

Leading the charge against this scourge that, woe befall us, is a plague upon our nation and a pox upon all of our houses is the entire political left and the entire establishment right.

Last weekend in El Paso, a gunman who allegedly published an online manifesto which fretted about white demographic displacement shot and killed at least 22 people.

In the same issue of National Review, the supremely unattractive and eternally annoying David French urges the US government to declare WAR on “white nationalist terrorism”:

Every bit as evil, you say? How might that be quantified, kind sir? Would you estimate that both groups rank, say, a solid 9.84 on your Evilometer?

French is so terrified of the White Plague that he doubled down and wrote an article for TIME demanding that his “Fellow Republicans” reject the “Alt-Right Virus Infecting America”:

The old virus of white nationalism has been injected into our culture in a new way, and it’s imperative that we recognize its symptoms–including its language and ideas–and react with the energy and commitment to banish it back into the irrelevant margins of American life.

In the same issue of TIME, Rod Rosenstein tells us “How To Stop White Supremacist Terrorism.” Thanks, Rod.

And yes, the very same issue of TIME quotes David Hickton, a former U.S. Attorney who directs the University of Pittsburgh Institute for Cyber Law, Policy and Security, who warns:

White supremacy is a greater threat than international terrorism right now. We are being eaten from within.

OK, so we’re not being eaten from without but from within. So it’s not the invaders, it’s the ones who are complaining about the invasion. It’s not the parasites—it’s the host. Got it.

So are the major Democratic presidential candidates. While Trump was visiting the sites of last weekend’s shootings, here’s what Joe Biden said:

Elizabeth Warren, seemingly unperturbed that Dayton shooter Connor Betts said she was his pick for president, focused on what happened in El Paso instead:

We need to call out white nationalism for what it is—domestic terrorism. It is a threat to the United States, and we’ve seen its devastating toll this weekend. And we need to call out the president himself for advancing racism and white supremacy.

Donald Trump, who is constantly called a white supremacist despite the fact that he almost never even acknowledges the existence of whites as a group, likewise maligned white supremacy as “sinister”:

In one voice, our nation must condemn racism, bigotry and white supremacy. These sinister ideologies must be defeated. Hate has no place in America.

Where the hell are they all—both the mainstream leftist press and the controlled-opposition mainstream conservative press, as well as Republicans and Democrats across the board—getting the idea that “white supremacist terrorism” is such a threat?

For one thing, they’re swallowing misleading media propaganda such as this article on Yahoo! that claims “white supremacists were responsible for all race-based domestic terrorism incidents in 2018.”

But if you continue reading the article, it also says that “25 of the 46 individuals allegedly involved in 32 different domestic terrorism incidents were identified as white supremacists.”

And in the grand scheme of things, why is it considered far more “evil” to shoot multiple people over ideology rather than your sneaking suspicion that they looked at you funny?

There’s also the issue of semantics—depending on the shooter’s expertise, a “mass shooting” is far different than a “mass killing.”

This website says that in 2019, among the 72 shooters who killed or wounded four or more people, 51% were black, 29% were white, and 11% were Latino. In other words, compared to their relative quotient of the population, the only group that wasn’t underperforming in deadly and injurious mass shootings were the blacks, who were overrepresented by a resounding 400%.

The perennially leftist rag Mother Jones keeps a database that defines “mass shootings” as ones that leave three or more victims dead. This year there have been seven such shootings, with five of the perps being white and two being black. Again, at 28%, the blacks are going way beyond the call of duty, while whites are committing mass shootings at a clip only slightly above their portion of the population. This differs from Mother Jones’s mass-shooting numbers for 2018, in which both whites underperformed while Hispanics—who comprise about 18% of the population but committed 41% of that year’s mass shootings—boldly overperformed.

Just about every available statistical analysis undermines the idea that whites are overrepresented in mass shootings. A 2017 report in the Journal of Interpersonal Violence found that whites committed less than half of both “public mass killings” and shootings of relatives or partners.

A 2018 policy brief by the Rockefeller Institute found that whites accounted for 53.9% of mass shooters—again, a statistical underrepresentation.

And a scan of mug shots gleaned from this database of all the mass shooters who can be identified so far in 2019 shows far more coffee than cream.

But again, we are being commanded to believe that killing a group of people from a different race over the ideology of racial survival is far more malevolent and ignoble than taking out an entire gang rival’s family because their leader impregnated your baby mama.

To the powers that be, it’s far worse when whites kill nonwhites than when nonwhites kill one another. And they don’t even like to mention that on a per-capita basis, far more nonwhites kill whites than get killed by this imaginary tsunami of “white supremacist terrorism.”

The entire media, all of big tech and academia, both political parties, and even that infamous Nazi Donald Trump are all aggressively opposed to the idea that white identity is a good thing.

By the US government’s own definition, “disenfranchisement” can lead to terrorism.

A terrorist’s very identity is formed out of a sense of being disempowered, so they resort to violence in an effort to overthrow reigning power structures. I’ve long said that the only meaningful distinction between a cult and a religion is that a religion has far more power. Same goes for the difference between a terrorist and a government official.

By insisting that “white terrorism”—and no other kind of racial terrorism—is everywhere, these idiots may have just admitted for the first time that “white privilege” is nowhere.

And apparently they’re terrified of what might happen when white people start to realize it. That’s the real terror in this equation.