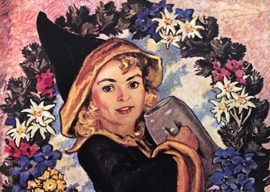 The bells are ringing, the bells are ringing, ding-dong, ding-dong. The cows are down from up high, where they’ve been grazing since spring. From my window I look at them and they stare back. I love hearing cowbells, day and night, and their sounds accompany me while I hit the makiwara. I like it best when they cozy up and examine me from up close, with absolutely no reaction. No emotion, no curiosity, serene-like. The one that grazes just outside my window I call Emily, and she has even more “tsuki no kokoro”—mind like the moon, in karate parlance—than the rest. No giveaway the opponent can seize upon. The opposite of, say, Emily Maitlis, the BBC sexpot whose pointy features and lean and hungry looks are hardly bovine. Mind you, her expressions remind me of those Arab souk sellers who try to convince potential buyers that the statuettes of Queen Nefertiti they’re peddling were discovered in her grave. My cow is the antithesis of the BBC one, guileless and totally at peace with her surroundings. Ding-dong, ding-dong.

Next week I shall be reporting to you from the Big Bagel, where a collective nervous breakdown has taken place. And here’s a bit of news that I have from the highest and most unimpeachable of sources: The New York Times, The New Yorker, and network American male pundits have been beating up their wives, boyfriends, or partners, as the case may be. In turn, their wives have all missed their periods, and some transsexual partners have also. (Or they imagine they have.) This is all due to the Kavanaugh confirmation, I am told by the highest authority. But for now I will tell you about the best-ever party I went to last weekend in Munich, and the brilliant Oktoberfest blast given by Countess Maya von Schoenburg.

In these increasingly horrible times due to the brutalism of today, Maya’s party was like the proverbial oasis in the middle of the Kalahari. Parties began the downhill slide when so-called celebrities were invited to society get-togethers. First the Hilton sisters, then the Kardashians, now even lower people like James Stunt and Philip Green. But for the most part, Maya stuck to the Gotha, around 220 of the best, but the success of the blast was because of the children. Grown-up children, that is. There were Schoenburgs galore, and their grown-up children; Thurn und Taxis and children; and Taki and children, my new countess daughter stupendously pregnant with her count and wearing her dirndl like a true Austrian.

“In these increasingly horrible times due to the brutalism of today, Maya’s party was like the proverbial oasis in the middle of the Kalahari.”

Maya’s presence at her own party alone deserves not only praise, but the Grand Cross of the Iron Cross with Oak Leaves for bravery. Two weeks earlier she had a major lung operation, the last of many interventions after a lifetime of heavy smoking. But there she was, greeting us and laughing and standing up among a crowd directing us to our seats. Her son Moritz Flick gave the most wonderful speech about what a great mother to four children she’s been, and how together they would face an anxious future. People openly wept.

There were no tears the previous night. Munich is among the most beautiful cities of Europe, and Oktoberfest takes place on a hill next to the cast-iron statue of Bavaria before the magnificent Doric temple known as the Hall of Fame. Over 5 million liters of beer are consumed every year, but the rowdy crowds were friendly and peaceful, if a bit pukeful. Maya’s party at the festival was strictly separated by smiling fuzz, all tall and blond and Teutonic. Wunderbar!

There were Pugs galore, Hanovers, Hutleys, Hoares, etc…and the nicest Brit royal bar none, Freddie Windsor, and then the most beautiful young women I’ve laid eyes on, starting with Mafalda of Hesse, and various blonde daughters whose names my son would not give me. While looking for my table I noticed Bill Clinton and Hillary arriving, and then Maya’s sister Gloria yelled out my name and indicated I was at her table. On her right was the 42nd president, who took my hand and looked at me almost quizzically. His eyes were asking why, but there was a smile on his face. While he was president, I once sat next to his press representative George Stephanopoulos, and he told me they would read me each week and marvel at the venom I would direct at 42. Hence the quizzical look and long-held handshake. I sat across from Gloria and Barry Diller, the Hollywood mogul married to Diane von Furstenberg who had flown the Clintons and Annette de la Renta for the party. I had a brief chat with Bill, and he agreed with me that the Democrats had overcooked it about Kavanaugh.

But the night belonged to the young Gotha-mites, who were all dressed in their Bavarian costumes and whose partying hardly reflected the modern world of freaks and uglies. Next to me sat the most attractive woman of all, Mary-Clare Elliott, whose only blemish is that she’s in love with and loyal to her hubby, Ben, nephew of Camilla. I opened the conversation with a question: “How many children do you have?” “Two.” “With me you would have had eight by now.” “Thank God I’m not married to you.” Yet despite the rough beginning, Mary-Clare turned out to be the best company and friendliest girl of all, so now I suffer like never before. But the night and the party belonged to the one and only Maya, whom I thank for the best blast ever.