Thank God, the Shar-Pei Puppies and the Manet Paintings Are All Safe 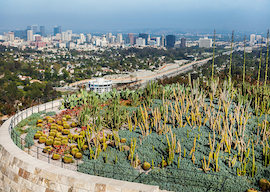 ORLANDO—They’re calling it the Getty Fire, because it started up by Mulholland Drive just north of the Getty Museum, which sits on a precipice overlooking the San Diego Freeway, better known as the Four-Oh-Five. It instantly engulfed 600 acres and destroyed a half-dozen homes and by the third day containment still stood at 5 percent despite having 1,100 firefighters in battle gear, unable to cope with Santa Ana winds gusting up to 80 miles an hour. The whole side of the mountain was evacuated. Thousands of people, hundreds of homes, and these weren’t just any homes—LeBron James ended up driving around El-Lay with his family packed into a vehicle, presumably an Escalade, looking for a place to stay.

But it was art enthusiasts all over the planet who were most horrified by the news. In North America, the J. Paul Getty Museum is probably second only to the Metropolitan in New York on the Treasures-of-Art-History scale, and the fire was raging just a half mile away, with a good likelihood it would travel on down the slopes and start incinerating more buildings. What would happen to the illuminated medieval manuscripts from Aachen, the Rembrandts, the Titians, the Manets, all those masterpieces that Getty brought back from Nazi Germany, Russia, Italy, and Greece?

The answer, apparently, is that nothing would happen to any of them. “The safest place for the Getty treasures,” said the museum director, “is inside the Getty.”

The walls are fire-resistant travertine, reinforced by concrete and steel. The roof is made of crushed stone, so wind-borne embers have no chance of igniting. Even the landscaping on the grounds of the museum is fire-resistant, with a million-gallon water tank ready to be activated anytime heat touches the ground.

But what about the smoke?

No problem, say the Getty engineers. The museum is actually a building-within-a-building, with air systems between the two outer walls that allow the whole complex to be hermetically sealed and for air to be recirculated the same way it’s done on aircraft.

So the Neolithic clay figurines are safe. The Ottonian illuminations are safe. Pontormo’s Portrait of a Halberdier is secure.

“If it’s possible to fireproof your home, why wouldn’t you go Getty with your architecture and seal that baby up?”

What’s not safe are all the homes of the millionaires and billionaires scattered across Mandeville Canyon. Leading to the question: If it’s possible to fireproof your home, and you have millions of dollars, and you live in one of the most fire-prone regions in the world, why wouldn’t you go Getty with your architecture and seal that baby up?

Pets don’t have to worry. Within an hour of the fire breaking out, there were animal shelters in place, and they were subdivided into shelters for different sizes of animals. After all, you don’t want the Tibetan mastiffs chewing on the toy poodles during the many days of forced evacuation. And you certainly don’t want the polo ponies removed to the same shelter as the Shar-Peis, Chow Chows, Akitas, Salukis, and Irish wolfhounds. There are so many Labrador retrievers in the Santa Monica Mountains that you probably need a shelter just for them and them alone.

So the animals are safe. The art treasures are safe. Unfortunately, the landscapers and housekeepers kept showing up for work after the mountain was sealed off, thinking, “Better have the place looking great on the day before it burns up.” There were also misguided evacuees lined up in their Porsches and Lexuses outside the roadblocks, requesting permission to go back into their homes “just for an hour” to retrieve wills, stock certificates, divorce decrees, and sex toys.

Like everything in El-Lay, there was an air of unreality about the fire. It won’t affect me. I’ll be in and out so fast no one will notice. And I’ll send in Regina from East El-Lay to see if she can find that last Persian kitten in the next-door neighbor’s yard. All the rooms are taken at the Beverly Wilshire, the Bel-Air, the Viceroy L’Ermitage, the Peninsula, and the Mondrian, but I just heard about some suites coming open at the InterContinental and, if we have to rough it for a couple nights, the Hollywood Roosevelt. If all else fails, we can get a car service to take us to Pasadena and check in at the Langham Huntington. Tell the kids it’ll be just like camping out!

In other words, it was once again California’s answer to the periodic message from God: “Don’t live here. This is an unnatural environment prone to catastrophe.”

But there’s a great party going on tonight at the Beverly Hills Hotel, I guarantee it. Maybe LeBron will drop in.