Thar’s Meth in Them Thar Hills 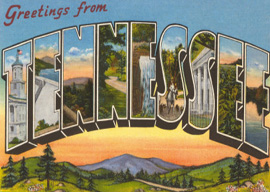 Two years ago Oak Ridge, TN housed the world’s fastest supercomputer. Even better, my state took the #1 rank for meth-lab busts that year. Nothing says “vicarious achiever” like state pride, but those glory days were short-lived.

In October 2010, as Tennessee’s Jaguar computer predicted climate change and quietly plotted humankind’s demise, China’s Tianhe-1A overtook it with a brain-searing 2.5 quadrillion calculations per second”the sort of furious computation only a crank-shooter could appreciate.

Our Southern pride was still stinging when it was announced last month that in 2011, Missouri topped Tennessee’s eye-popping 1,687 meth-lab busts with a high score of 2,096. It’s time to pick up the pace, Tennessee. Here, try a bump of this….

“Tennesseans invented Mountain Dew and perfected moonshine, yet somehow we got pigeonholed as a crystal-meth capital.”

Despite this recent demotion, my state remains an undeserving icon for meth addiction. You’d think we invented the stuff, but the Chinese have been making tweak tea from ephedra shrubs since ancient times. A Japanese chemist isolated crystal meth in 1919. Then the real party started during WWII, when Nazi Germany distributed over 200 million meth tabs to its soldiers. That forever solidified methamphetamine’s reputation for bestowing superhuman endurance, teeth-grinding concentration, and an all-around bad attitude. After the US made pseudoephedrine available over the counter in 1976, West Coast biker gangs supplied this powdered pick-me-up to the jittery public. Tennesseans invented Mountain Dew and perfected moonshine, yet somehow we got pigeonholed as a crystal-meth capital.

NPR recently ran a story featuring gruesome “shake-and-bake” casualties in Nashville. Although they hype shake-and-bake as some new method of meth production, I’ve been hearing about it for at least a decade. It is basically desktop publishing for cranksters”a small-scale, DIY mobile meth lab that requires little more than a Gatorade bottle, drain cleaner, lithium batteries, and a box of pseudoephedrine, which yields a few potent grams. It’s so egalitarian and empowering to the poor, you’d think NPR would be more supportive.

Dr. Jeffrey Guy of Vanderbilt Medical Center’s burn unit told NPR that an astonishing 30% of his patients are inept shake-and-bakers. Curiously, when he spoke to Boston’s Here & Now earlier in the week, Dr. Guy had claimed that meth-makers were responsible for a full two-thirds of Vanderbilt’s burn victims. Statistical discrepancies aside, these patients form an endless parade of facial deformity and full-body chemical burns that cost an average of $130,000 dollars to treat. Like all meth production, shake-and-bake is a relatively exact science. One false move and you”re holding a blazing napalm bomb due to what Dr. Guy poetically calls “the intimacy of shake-and-bake.” Since meth heads rarely have insurance, the taxpayer foots the bill. At least seven burn units across the US have been shut down due to battery-benders’ unpaid expenses.