That Every Mensch Be Armed 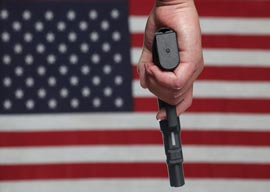 I could see it in my website traffic: Someone in the public eye had said something stupid about Jews and guns. People were trying to fact-check the comment, and they were heading straight for my site. A piece I wrote in January 2013 ridiculing a familiar gun rights meme (the one that goes something like “if the German Jews had owned guns, there”d”a been no Holocaust”) began racking up thousands of new hits last week, with search terms like “Jews,” “guns,” “2nd Amendment,” and “Holocaust” leading the charge.

A quick check of my morning news feed revealed the culprit”GOP presidential contender Dr. Ben Carson, who seems to think Holocaust historiography is so simple even a brain surgeon can do it. Carson was joined in his repetition of the shopworn gun rights clichÃ© by his buddy and fund-raiser, Fox News personality Dr. Keith Ablow, a psychiatrist known for his wacky and unverified on-air claims.

Every few years, the “gun ownership would have stopped the Holocaust” argument pops up in the aftermath of a tragedy like a mass shooting, or during a worse tragedy like a U.S. presidential election. It’s important to understand why the “sheeny get your gun” meme is, from a Holocaust-history point of view, utter rubbish, but it’s even more important to understand why the meme is symbolic of how the gun rights lobby often loses in the court of public opinion.

Let’s start with the historical stuff. The notion that if the German Jewish population had been well armed the Holocaust would have been avoided is asinine. Jews represented less than 1% of the prewar German population (500,000 people in a nation of 67 million). Even if every single Jew had a rifle, the Nazis had a massive police force and an army with the most modern weaponry available at the time. During the first eight years of Nazi rule, Jews were not the primary target of the police state. Rather, the Gestapo busied itself with real or perceived political enemies, many of them communists, some Russian-backed. Those people did have weapons and access to weapons, but that made little difference. The Nazis were a superior force. That the Nazis successfully rounded up and imprisoned trained, armed partisans is not theory, it’s fact.

FNC’s Ablow claims that if only the German Jews had physically resisted, if only they”d attempted to “crush the skull or scratch out the eyes of any Nazi who turned his back for one moment,” it would have led “the people of that country and the world to be moved to action by their bold refusal to be enslaved.” That’s rich. From 1933 through 1941, the legal rights of German Jews were indeed curtailed, but not to an extent worse than the restrictions imposed upon blacks in America or nonwhites in England’s vast colonial empire. The ruling powers in the West would not likely have stood up and applauded the idea that an oppressed people should skull-crush and eye-gouge anyone who deprives them of the right to marry who they please or own property where they choose. To say that rampant eye-poking and skull-cracking in the face of government oppression (officially known as the Stooge Strategy) would have been a reward in its own right, as many of my anarcho-libertarian friends would argue, is one thing; but to claim that it would have prevented the Holocaust is another. Such an assertion is pure pseudohistorical fantasy.

Every time resistance did occur, it merely worsened the Jews” precarious situation. In November 1938, Herschel Grynszpan, a 17-year-old German-born Jew living illegally in France, walked into a gun shop and purchased a revolver and bullets. France had no waiting period, no background check, no restrictions on him being a Jew, an illegal alien, or 17 years old. The seller even helped him choose the right model, and he gave the kid a quick tutorial on shooting. Armed with his new purchase, Grynszpan walked to the German embassy and assassinated a German diplomat as revenge for the fact that his parents had been deported from Germany back to Poland (yes, he was upset that his parents were forced to leave Germany, but that’s a whole “nother story). The assassination led to the orgy of anti-Jewish destruction known as Kristallnacht. Kristallnacht was condemned by many in the U.S. and England, but the fact that Kristallnacht “moved the world” did nothing to prevent the Holocaust.

As the Grynszpan case illustrates, Jews in France had easy access to guns, and a fat lot of good that did in preventing the Nazi invasion of that nation and the deportation of many Jews from French territory. This rather handily blows Carson and Ablow’s theory out of the water. Plus, the majority of Jews killed during the Holocaust were not German Jews. German gun laws didn”t apply to preinvasion Poland and Russia. The Polish and Russian Jews killed during the Holocaust were citizens of nations that did indeed fight back against the Nazis. They fought, and they lost to a superior military force.

And here we see the problem with what I call “utopian” pro-gun arguments, the kinds that claim “this wouldn”t have happened to a well-armed populace.” It’s bunk. Armed people are defeated by other armed people every day of the week, whether on a grand scale (one army triumphing over another) or a small one (an armed hood shot dead by an armed cop). Being armed might be practical in many situations, but it isn”t a panacea. Unfortunately, like anyone with a good idea, gun rights people often become evangelists, making promises that are simply unrealistic.